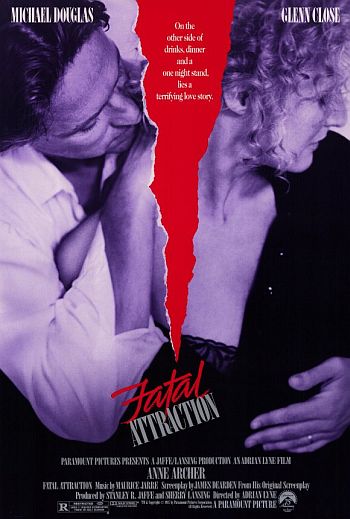 All this and rabbit stew!
"I'm not going to be IGNORED, Dan!"
— Alex Forrest
Advertisement:

Fatal Attraction is a 1987 thriller directed by Adrian Lyne, about a married man named Dan Gallagher (Michael Douglas) who has sex with a co-worker named Alex Forrest (Glenn Close) while his wife and child are away. Dan expects their affair to just be a one-night stand, but Alex, who is a bit on the unbalanced side, has other ideas.

Alex attempts suicide when Dan explains to her that he has to get back home and get on with his life. He tries to put the affair behind him, but Alex will not let go, and stalks Dan with the intent of getting him back, and as Dan continues to turn her down, Alex gets increasingly unhinged, reaching into his life and his family with devastating effect. It gets to the point where Dan and his family have to move, but Alex still won't leave them alone, continuing to stalk them, her obsession turning to hatred over time, culminating in a horrific scene which coined the phrase "bunny boiler." Dan, who originally wanted to keep the affair secret from his wife, now has to protect his family from a psychotic woman who is willing to do anything, even kill, in order to get her man.

Fatal Attraction was the second highest grossing movie of 1987, was nominated for several Academy Awards, and became hugely popular both in the United States and internationally. Alex Forrest was cited as a notable film example of someone with erotomania

. The movie was also the cause of much discussion about marital infidelity (and the Double Standard gender politics involved in the Stalking Is Love trope) for a good while afterward.

Not to be confused with Fatal Instinct.