My Biological Clock Is Ticking 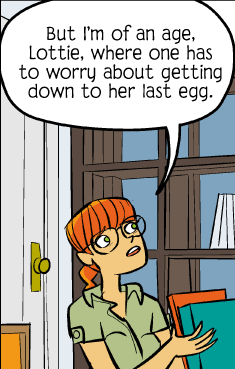 Sometimes, it's about desperation or uncertainty.
"Cut the crap, Hamlet! My biological clock is ticking, and I want babies now!"
— Ophelia, The Complete Works of William Shakespeare (abridged)
Advertisement:

A typical plot in a Dom Com, when a middle-aged woman realizes that menopause is right around the corner and she doesn't have much time left to have children if she hasn't already, or if she wants more. Given the Law of Inverse Fertility, the harder she tries to become pregnant before The Change happens, the less likely she will be to actually get pregnant, but the moment she accepts that it won't happen, she will suddenly find herself with child.

Common plots involve a woman looking into sperm donation or adoption, or if she is approaching Old Maid status, attempting to get married before her 'expiration date.' As in Real Life, the latter is not a good idea and sometimes ends disastrously. She may end up using a Chosen Conception Partner in someone she trusts to have a child.

And Heaven help the poor thing if she also has parents who are screaming "I Want Grandkids!"

This trope is so widely-recognized across cultures that some languages have a word for it. For instance, in German, the word is Torschlusspanik — literally "last minute panic." Technically it can describe dread over any kind of impending deadline, but it's most commonly used for women's ticking biological clocks.

An Older Than Feudalism variant is the woman who wishes for a child and proceeds to have a Wonder Child. Related to Christmas Cake. See also Mandatory Motherhood. See also Absurdly Elderly Mother if a middle-aged or elderly woman conceives a child at the time her biological clock seemingly stopped.