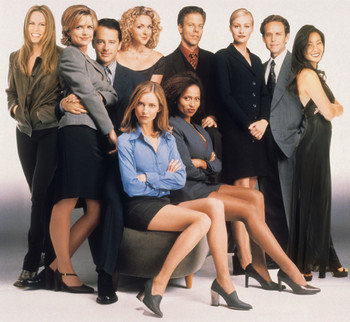 The cast in 1998.
I've been searchin' my soul tonight,
I know there's so much more to life,
Now I know I can shine a light,
To find my way back home.
— From the opening theme "Searching my Soul" by Vonda Shepard
Advertisement:

Ally McBeal is a Work Com-slash-Dramedy created by David E. Kelley about a neurotic lawyer and the wacky people she works with. The series ran on Fox from 1997 to 2002, a total of 112 episodes (all but one of which was written or co-written by Kelley) in five seasons. Ally herself was played by Calista Flockhart.

The series went for 'nutty' in a very big way, with preposterous lawsuits (man is fired for having bad comb over and sues, dying boy sues God, etc.), dream and fantasy sequences all over the place, spontaneous dance numbers and the like. Probably best known in its early years for the CGI baby dancing to the "ooga-chaka" chorus from Blue Swede's "Hooked on a Feeling", and in its later seasons for a surfeit of "daring" "lesbian" kisses among various women in the cast. Achieved a kind of brilliance in the legal arguments made by the character John Cage. Achieved retch-inducing horror in its mundane romantic complications.

The show was a ratings success when it aired, and a big enough part of pop culture that Time ran a cover story on it, accusing it of killing feminism. However, after its cancellation it vanished off the public radar quite a bit.

Among sci-fi nerds, it's known for being the subject of a Futurama episode as a show called Single Female Lawyer.

In 2021, reports emerged of a limited-series revival being attempted.