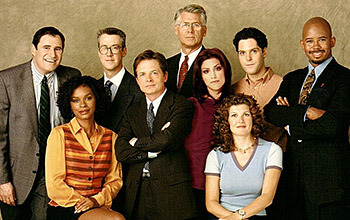 Political satire about the Deputy Mayor of New York Michael Flaherty, played by Michael J. Fox, and the challenge of keeping a hopelessly inept man in office. Political ribbing was always at the forefront but it soon came to revolve more around the characters' personal lives.

Flaherty relied on his group of quirky, yet somehow competent, staff to manage all the details and keep things in check. James Hobert was the Midwest farmboy who wrote the political speeches, Nikki Faber was a romantic yo-yo who managed the accounting, Stuart Bondek was the sex-crazed publicity adviser, Janelle Cooper and Stacey Paterno sometimes switched roles as secretaries between Mike and the Mayor, Paul Lassiter served as the Butt-Monkey press conference mediator and Carter Heywood was the minority representative as a gay black man (done to meta levels). And despite his general Cloud Cuckoolander nature, Mayor Randall Winston on occasion would reveal a surprisingly adept mind that surprised the others.

Later episodes brought in Heather Locklear as campaign manager Caitlin Moore. Originally Carla Gugino served as a co-lead character as Mike's girlfriend Ashley Schaefer, a reporter who evoked a certain animosity with the rest of the administration. Deciding it would be more interesting for Mike to be a bachelor they wrote her out after the first half season. Especially given the presence of fan favorite Carter by the end the series, it often contained more Ho Yay per half hour than three seasons of Will & Grace combined.

Originally created as a vehicle for Fox, but when his Parkinson's Disease grew worse, he left the show and was replaced by Charlie Sheen — who, acting as himself (a gifted professional with a lot of personal issues involving sex scandals and drug use), seemed like a second Stuart albeit sexually more successful. In addition half the cast also left the show, leaving Charlie with the mayor, Caitlin, Carter, Paul and Stuart as the only remnants of the original show. Mildly successful despite the expected fallout over replacing the lead character, it was canceled two years later.

After Fox's departure the show's creator, Bill Lawrence, and most of the staff went on to create the even more successful Scrubs, on which most of the major Fox-era Spin City actors (including Fox) have appeared in cameos/guest roles.

Not to be confused with Sin City, which incidentally starred Carla Gugino as well.

Off-network reruns were originally distributed by the first Paramount Television, which produced Fox's previous series Family Ties. At the same time CBS acquired the original Paramount TV library, the Paramount studio itself acquired DreamWorks which originally produced the series. Spin City and other DWTV series were incorporated into the library of the second Paramount Television, which launched in 2013. Following the creation of Viacom CBS (now ParamountGlobal), the rights to Family Ties and Spin City were brought under one roof.