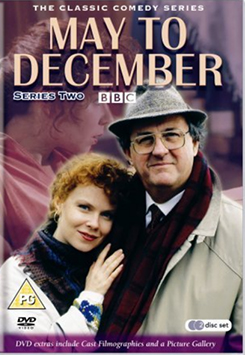 It refers to a romantic relationship where there is a drastic difference in age between the two participants.

These seem to be less common in modern media, perhaps because some now perceive them to be Squicky. However, they still crop up from time to time; they're very common in soaps in particular.

The ways in which these relationships can occur in media can vary:

Generally, the man is the "December" (elder) and the woman is the "May" (younger), though it can happen the other way around. This can sometimes be a Double Standard in Hollywood, as while older actors get paired up with younger actresses, it doesn't happen so often in reverse

May lead to cases of Ugly Guy, Hot Wife if the years haven't been kind to him. This is the romantic version of the Intergenerational Friendship.

It is the Real Life, mundane version of the Mayfly–December Romance and the Sub-Trope and extreme version of Age-Gap Romance.

Due to continued confusion over the applicability of this trope, here are the criteria that need to be satisfied to qualify for inclusion here:

NOTE: This is an OBJECTIVE trope, meaning that it uses explicitly defined criteria; it is NOT a place to put any relationship which feels Squicky due to age differences. 30-year-olds dating 13-year-olds are not this trope.

This is Truth in Television, of course, but wasn't nearly as common in the past as some would have us think. Most couples in pre-modern days couldn't afford to marry until both the man and the woman had saved up enough to set up a household, and that could take years; it's therefore perhaps not surprising that the average ages at marriage for both men and women in Elizabethan England are identical to those in 21st century America where most of all married couples are within two to three years of each other. (It was even worse in medieval times when daughters would have to work for years to save up the customary fee owed their father's lord upon their marriage.)

Most May-December marriages in pre-19th century times were among the aristocracy, whose prominence in the history books is balanced by their small numbers (fewer than 0.5% of the population of Tudor England). Victorian-era historians, however, twisted the narrative, going as far as to destroy and deface records, to justify child marriage. At best their scholarship was unconsciously biased by their desire to justify their own cultural norms; at worst they deliberately lied.

See also Christmas Cake, Likes Older Men, and Likes Older Women. Wife Husbandry is when someone intentionally raises a younger person to be their spouse. When the December is a woman, she may be Mrs. Robinson. Compare December–December Romance for romantic pairings between older characters and Merlin and Nimue for non-romantic partnerships with a large age gap and a gender difference. Often the result of an Unequal Pairing. Compare Age-Gap Algebra when a mathematical formula is proposed for determining when a romance is this (and for which the criteria listed above are one example).

open/close all folders
Anime & Manga
Comic Books
A big problem with this trope in Comic books is the dual issue of the confusion of the character's age with the age from when the comic was first published, and the continual retcons and universe changes that are common (particularly in the last several decades) which completely re-write character histories. In particular, a large number of heroes/villains are problematic for this trope, due to extended human lifespans, but not quite long enough to qualify as Really 700 Years Old or similar. Many of their pairings are more May Fly December Romance, but due to Comic-Book Time, it's hard to categorize them. Please be careful with adding entries here.
Comic Strips
Fairy Tales
Fan Works
Films — Animation
Films — Live-Action
Jokes
Literature
Live-Action TV
Music
Myths & Religion
Radio
Theatre
Video Games
Webcomics
Western Animation
Feedback