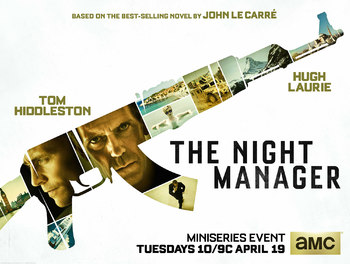 "There is a whole system that keeps our country where we want it, amongst the elites, punching above our weight. Well, it's a state of being. An ontology, if you like. And it has to be maintained. I mean, we need Richard Roper. America needs Richard Roper. Whether you like it or not."
— Geoffrey Dromgoole
Advertisement:

Based on John le Carré's 1993 novel of the same name, The Night Manager is a 2016 six-part crime drama BBC / AMC mini-series directed by Susanne Bier, which stars Tom Hiddleston and Hugh Laurie.

It follows the work of former British soldier Jonathan Pine, working as the night manager of a Cairo hotel. The mistress of a local arms dealer is a guest at the hotel and passes Pine paperwork linking illegal international arms sales with Richard Roper (Hugh Laurie), an English billionaire. He alerts a friend in the British consulate and tries to get her to safety, but the leak is discovered and she is soon found dead. Four years pass, and then Roper visits the Swiss hotel where Pine now works. This rekindles Pine's anger, and he is enlisted by British Intelligence to catch Roper red-handed. The entrepreneur is believed to have forged a criminal alliance between the secret arms trade and the intelligence community, prompting the need for surveillance. Pine infiltrates Roper's inner circle by becoming a felon himself, with no way out except to bring him down.