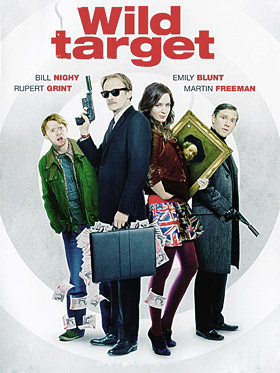 Wild Target is a 2010 black comedy film, based on the 1993 French film Cible émouvante.

Victor Maynard (Bill Nighy) is an experienced and efficient assassin living a lonely life. It's the family's business: Victor follows a family line of professional assassins, and he completes his assignments quickly and without remorse. His mother, Louisa (Eileen Atkins), is an intimidating woman very aware of his job, who expresses concern that he might be homosexual, wondering why he hasn't produced a successor.

Rose (Emily Blunt) is a not-so-average girl with a talent for thievery. Her most recent theft involves the sale of a fake Rembrandt painting (painted by her friend in the Restoration Department of the National Gallery), managing to swindle the buyer out of £1,000,000. The buyer soon discovers the swap and hires Victor to dispose of her. Victor takes the hit and immediately tracks Rose down, missing several opportunities to kill her due to chance, but he grows interested in her and agrees to protect her, while being joined by Tony (Rupert Grint), a local slacker.