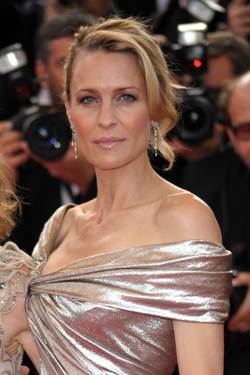 "I think the inception of my interest in arts was when I was around nine or ten and I started dancing. I was really convinced that I was going to go to New York and be onstage in 'A Chorus Line.'"
Advertisement:

From 1984 to 1988, she starred in the Soap Opera Santa Barbara, which earned her multiple Daytime Emmy nominations. She made the transition to film, starring in The Princess Bride, Forrest Gump (earning her a Golden Globe Award nomination), Toys, Message in a Bottle, Unbreakable, The Conspirator, Moneyball and The Girl with the Dragon Tattoo. She also appears as Claire Underwood in the Netflix series House of Cards, for which she was nominated for a Primetime Emmy Award for Outstanding Lead Actress in a Drama Series, and for which she won the Golden Globe in 2014 for best actress in a TV series (drama), making her the first actress to win a Golden Globe for an online-only web television series.