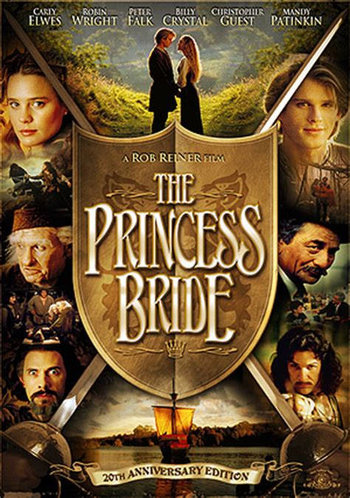 "Is this a kissing book?"
Grandson: Has it got any sports in it?
Grandpa: Are you kidding? Fencing, fighting, torture, revenge, giants, monsters, chases, escapes, true love, miracles...
Grandson: [sighs] It doesn't sound too bad. I'll try to stay awake.
Grandpa: Oh, well, thank you very much. Very nice of you. Your vote of confidence is overwhelming.
Advertisement:

The Princess Bride is a 1987 movie directed by Rob Reiner, adapted by William Goldman from his 1973 book of the same name. The story is set in the fictional European nation of Florin, and stars Buttercup (Robin Wright), a simple yet incredibly beautiful farmgirl, and Westley (Cary Elwes), the farmhand she enjoys ordering around. Although they realize that they share the incredibly rare thing called "true love", fate conspires to keep them apart, as Westley is lost at sea.

Five years later, Prince Humperdinck (Chris Sarandon), who rules Florin in place of his elderly and doddering father, decides to celebrate the kingdom's 500th anniversary by marrying Buttercup, who is still the most beautiful woman in the kingdom. Buttercup, knowing that the Prince is well within his rights and believing she can never love again anyway, reluctantly agrees.

In a plot against the throne, Buttercup is kidnapped by the criminal trio of Vizzini (the mastermind), Fezzik (the giant), and Inigo Montoya (the world's greatest fencer, traveling to avenge his father), played by Wallace Shawn, André the Giant, and Mandy Patinkin, respectively — but their steps are hampered by a mysterious man in black who seems determined to stop them at all costs. The subsequent adventures are madcap, iconic, and brilliant.

The movie uses a Framing Device of a grandfather (Peter Falk of Columbo) reading the story to his sick grandson (Fred Savage of The Wonder Years fame) with the boy complaining about the story at various points. ("They're kissing again.")

An official roleplaying game, The Princess Bride Roleplaying Game was fully funded on Kickstarter in 2018.

and released by Toy Vault, Inc. using the FUDGE system.

In 2020, the film was "remade" by Jason Reitman for the mobile app Quibi to benefit World Central Kitchen during the COVID-19 Pandemic. Various celebrities filmed themselves reenacting scenes from the film with homemade props and costumes. Fred Savage, Cary Elwes and Rob Reiner participated as did Rob's father Carl Reiner who filmed his scene just three days before his death. See Home Movie: The Princess Bride.

open/close all folders
A-M
N-Z
Grandson: Grandpa... do you think you can read it for me again tomorrow?
Grandfather: As you wish.
Feedback