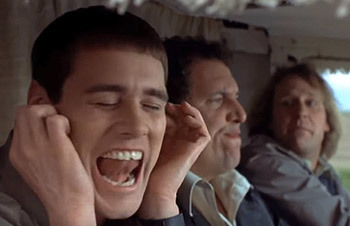 "La la la, I can't hear you!"
— Just about everybody using this trope, ever
Advertisement:

This is when a character gets on another character's nerves, usually by talking nonstop, and the other character covers his ears and starts singing so he can't hear him.

The person doing this will almost always either start singing "The Star-Spangled Banner", or else just go "La-la-la". This is sometimes done (in-universe or in real life) to avoid hearing a Spoiler, something squicky, or anything else that a character feels he or she would be better off not hearing. Usually goes hand-in-hand with Too Much Information.

Compare I Can't Hear You (outside noises disrupt a conversation), Headphones Equal Isolation (headphones block outside sounds), and Fake Static (pretending that a remote communications channel is failing).