Slippery as an Eel 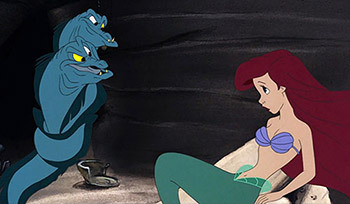 If it lurks in a reef and has two sets of teef, that's a moray.
Advertisement:

Of all the sea creatures in the world, alongside dolphins, sea otters, and whales, the sneakiest sea creature alongside the shark and the octopus would be the moray eel. In nearly every form of media, eels are depicted as being sneaky creatures that have a propensity for tricking other sea creatures. It's a sure sign that they cannot be trusted. In other words, they're basically the oceanic version of snakes. Actual sea snakes (as opposed to mythical sea serpents) are Seldom-Seen Species, probably because though highly venomous they're far less intimidating-looking than moray eels, which basically look very bizarre and downright alien, right down to having Xenomorph-like jaws in their throats.

Moray eels are the species most often used, due to their fearsome appearance, though the occasional Psycho Electric Eel may be used for this trope as well (despite electric "eels" being a type of knifefish). And sometimes, in an example of Artistic License – Biology, a moray will be a Psycho Electric Eel.