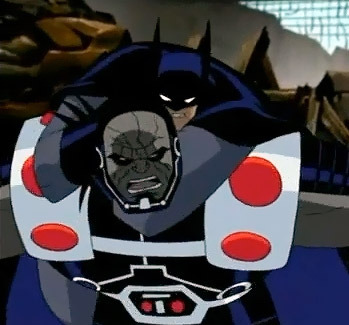 A person fighting a much bigger opponent attempts to disable the big guy by jumping on their back and wrapping their arms around their neck; it looks sort of like a rear naked choke combined with an uncooperative piggyback ride. This move is usually performed in the midst of a fight while the big guy is occupied with someone else and doesn't notice the little guy creeping up behind him. Often the little guy is trying to protect an ally in distress by distracting the big guy before he can deliver the finishing blow.

Since the big guy will do everything in his power to get the little guy off of him—whether by bucking like a bronco, attempting to grab the little guy and throw him over his head, or by slamming his back against a wall—the little one needs to somehow hang on and endure until oxygen deprivation causes the big guy to pass out, or at least until the distraction has served its purpose. It's not a move associated with elegance or technical skill. Depending on what's at stake, this sort of struggle can be made to look either desperate and dramatic, or clumsy and comical.

May overlap with Cranium Ride. Compare Colossus Climb, when the Big Guy is much bigger.

Goblin Slayer manages to turn the tide of the battle by utilizing this tactic against the goblin champion.

Goblin Slayer manages to turn the tide of the battle by utilizing this tactic against the goblin champion.