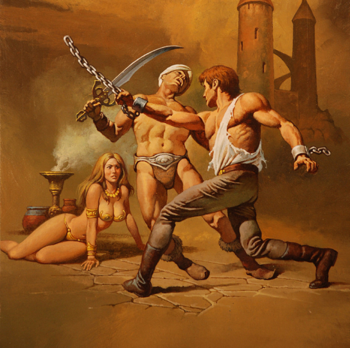 Feel free to help out anytime.
"If I am presented with a reasonable opportunity to save the day myself, I will at least try, and not wait for the hero to do it."
— #22, The True Love List: The Things I Will Do If I Am Ever the True Love
Advertisement:

The hero and the villain are having a Sword Fight or similar one-on-one altercation.

Meanwhile, our lovely heroine, whom the narrative will insistently claim is physically capable, is just standing around... and doing absolutely nothing (and not in a winning way, either). This isn't a case where she's trapped, incapacitated, physically impaired, or any less experienced than the hero, himself. This is an able-bodied woman with some established ability who is just standing around on the sidelines, helplessly watching while the men do all the dirty work.

So no trying to improvise to assist the hero. No calling for help. No making any attempts to stalk off while the villain is distracted; anything that could possibly enable the hero's success. Not even cheering the hero on to boost morale. You could replace her with an inanimate prop for all the good she's doing.

The situation doesn't necessarily have to be Hero vs. Villain. It can also apply between good guys, especially in terms of romantic competition. The point is that the girl is still not helping either of them nor doing anything to stop the fight, not even by saying something that could settle everything between the combatants.

There are cases where her inactivity or lack of involvement in a fight can be justified. As stated above, she may be injured or Bound and Gagged and thus unable to move. She could be lower on the Super Weight scale or lack experience. Another reason could be This Is Something He's Got to Do Himself (where none of the hero's allies help him) or the hero insists on an honorable one-on-one duel. An especially fickle heroine may simply be waiting to see which man comes out on top, since Women Prefer Strong Men.

What differentiates her from a regular Load is that it's established she has abilities or has choices at her disposal but when confronted with duking it out among the boys she's suddenly rendered inept by virtue of being female. Compare to Damsel in Distress but with a case of Faux Action Girl; which often serves as both the source and result of this trope. The distinction is that the Faux Action Girl is consistently failing to live up to her hype. It is a character trope. This trope here is more of a situational trope and it could have some justifying context (This Is Something He's Got to Do Himself for instance). Thus, not every Neutral Female is a Faux Action Girl.

Also compare Standard Female Grab Area which is where being caught by the wrist or upper arm is enough to impede her. Both tropes are often caused by the writers' unwillingness to have a woman fighting (and thus being hit by) a man. Polar opposite of the Defiant Captive, who may be helpless but won't let that stop her from telling her captors exactly what she thinks of them.

Not to be confused with female RPG characters with a Neutral component to their Character Alignment.