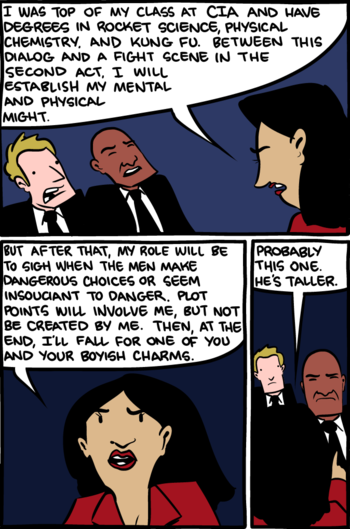 The Superfluous Female Protagonist™ lays it out.

"I'm a shinobi, too, but I'm always crying and relying too much on Naruto. I came here thinking that I was past all that... but still, I hesitate. I haven't really prepared myself at all. I can't do anything, I can't say anything... All I can do... is to trust them!"
— Sakura Haruno (in a moment of clarity), Naruto
Advertisement:

In the modern era, appraisals of gender roles have advanced considerably. Feminist movements, changing ideas of the ideal or attractive woman, and the overwhelming popularity of female characters who kick ass and take names has led to the formation of the Action Girl: the now near-universal idea in action-oriented fiction that being a woman doesn't affect a character's ability to be an effective fighter. Naturally, not every female character in those works is or even must be an action hero, but it's common enough that pretty much any story where people are expected to fight regularly will at least take a crack at it.

However, some writers, whether due to somewhat sexist worldviews, demographic-related pressure, or reliance on outdated tropes, just don't quite manage it. They want the natural popularity of the character type or the praise for defiance of gender norms and therefore appropriate its framing, but they end up falling into the same old pitfalls as the good old Damsel in Distress or Satellite Love Interest. Thus, the Faux Action Girl is born: an Action Girl whose "action" aspect is more of an Informed Attribute than anything else.

She's supposed to be The Hero (or one of the heroes) but never gets to actually do anything heroic. She has a well-grounded reputation as a strong fighter in her field but always fails miserably in the line of battle. Her talents and skills are well-known to fellow characters but for some strange reason, they're never seen by the viewers outside of perhaps A Day in the Limelight episode. Her status only exists as an established reputation and depends heavily on Genre Blindness; she never acts the way she's supposed to. Sometimes, the only way she qualifies as anything more than the Damsel in Distress is if you Take Our Word for It. If the writers are feeling merciful, however, the Faux Action Girl can be relied on to actually defeat her share of Mooks — or, in rarer cases, a female enemy.

The key to identifying a Faux Action Girl is the disproportionate hype — whether she's overrated or under-performing. Also, note that context does play a role; for example, in a show full of incompetents who think they're tough fighters, it doesn't matter if a female character behaves the same way. It is also possible to have a female character who doesn't fight or isn't as capable as some others for perfectly justified reasons whereas a Faux Action Girl is much less powerful or competent than other characters and true Action Girls for no logical reason. Note that villainesses are rarely Faux Action Girls because we expect them to be threats.

The Worf Effect used too many times on a legitimate Action Girl may turn her into a Faux Action Girl.

Please note that a Faux Action Girl is someone who already has a reputation as a fighter. If she is just a captured girl, then she's a Damsel in Distress. If she gets rid of the Distress Ball, she's just a Badass in Distress. If she has just started fighting and doesn't have the experience/fame handy still, she's likely Skilled, but Naïve or a Naïve Newcomer, and there's still room to see if she can grow into a real Action Girl or not. Merely because an Action Girl is captured does not automatically entail her transformation into a Faux Action Girl; generally, it is down to the nature of her kidnap/capture and how she deals with this circumstance in contrast to her other informed feats.

The characterization usually involves a form of Informed Ability: Most of these girls have big reputations and great past exploits. More or less the Distaff Counterpart to Miles Gloriosus and Fake Ultimate Hero. If the only one who lauds her "reputation" is the girl herself, then it's a case of either Small Name, Big Ego or Know-Nothing Know-It-All.

If much of the show's screentime is dedicated to showing the girl in question training and practicing only to lose when it counts, that's not this trope. That's Hard Work Hardly Works, and it can hit anyone (even The Hero in some stories).

Also contrast with Chickification, in which the producers take a character who is shown to be a legitimate Action Girl and make her incompetent. See also Standard Female Grab Area, the standard weakness of a Faux Action Girl, even though showing her drugged while her back is turned would make more sense.

Even though she's the co-star of the film, Yua Yaiba's stint as Justice Serval only lasts about a minute and she spends the entire fight getting easily beaten down.

Even though she's the co-star of the film, Yua Yaiba's stint as Justice Serval only lasts about a minute and she spends the entire fight getting easily beaten down.