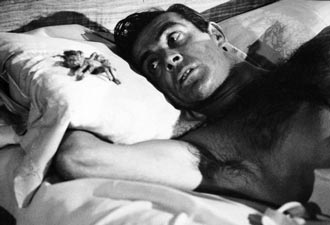 Worst. Bedmate Reveal. Ever.
"Budd, I'd like to introduce my friend, the black mamba."
— Elle Driver, Kill Bill Vol. 2
Advertisement:

This is when somebody uses some sort of dangerous animal as a discreet murder weapon. There's the old trick of leaving a snake in their hotel room, for instance, or the one where you drop a spider near their bed, or perhaps the one where you hide a scorpion in their suitcase. Whatever the animal, it's being used as a subtle but deadly surprise for the intended victim. The reasons for doing this vary: maybe the villain hopes that the murder will be deemed an accident (since sometimes, the animal could have gotten there by itself), although other times, it seems that the villain just likes doing things the difficult way for no good reason. Sometimes it's supposed to be some sort of trademark such as a villain with a snake theme. Sometimes it can be an ordinary house pet trained to cause an "accident" like leaving on the gas (read: turning it on after the victim is asleep).

Often, the murder animal seems to know its role in the story. Rather than waste time hiding or just wandering around aimlessly, as a real animal might do, it gets straight to the point and attacks the hero by the quickest route, despite having no apparent reason to do so. No matter how big the bedroom is, the spider will almost always end up crawling onto the face of the sleeping hero — and not, say, scuttling into the wardrobe, which is arguably more likely but rather less helpful for the plot. Although this could be justified, as these critters are cold-blooded and may seek heat/warmth. Don't expect a lot of sympathy for the animal, either. The ones chosen as assassins are generally a species which people consider Always Chaotic Evil like snakes and arachnids.

Not to be confused with a Shark Pool or other up-front use of animals as a means of execution. This is just about the animals which are delivered to the victim (rather than the victim being delivered to the animal) and which the victim isn't supposed to know about until it's too late. Compare Attack Animal for when someone directly commands an animal to attack, rather than leaving it as a trap. If it's just made to look like a death by animal attack, that's This Bear Was Framed. Compare Exit, Pursued by a Bear, which is more accidental.

Grammar Nazi Note: Several of the animals mentioned below are "venomous" — they inject some toxin in their victim. It is rarely relevant if they are "poisonous" — that is, toxic if you try to eat them or if toxin is absorbed through the skin.