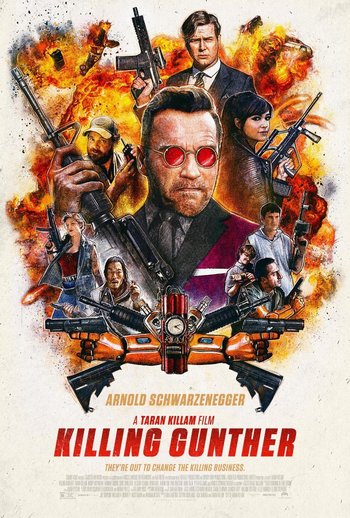 "If you wanna be king, you gotta kill the king."
"I'm kind of like a Gunther superfan. I'm obsessed with him. He's the greatest hitman ever. Everyone knows who he is, but no one does...I'm just excited to meet him; just walk up and shake his hand. And then, y'know, watch everyone...kill him."
— Gabe
Advertisement:

So there's this Professional Killer. He's the best of the best and has what could pass for a code of honour. Some would say that he's the boogieman of the criminal underworld. At some point, he crosses the wrong people or stumbles on one conspiracy too many or maybe he hasn't really done anything to prompt it, but at some point, he earns the murderous interests of his fellow hitmen. A Carnival of Killers descends upon our Noble Demon and he must use all his skills, cunning, and grit to overcome his exotic pursuers.

The fellow here is named Gunther and he is played by Arnold Schwarzenegger.

This is not quite his story. This is a movie about those who want him dead.

Each member of the team has their own reasons for pursuing Gunther. Some petty, some professional, and some personal, but they're enough to make them work together so they can hunt him across the globe. Oh, and they've hired amateur filmmakers Nate and Kimmy to make a documentary of the whole scheme, and they're not allowed to leave until they either succeed at killing Gunther or die trying.