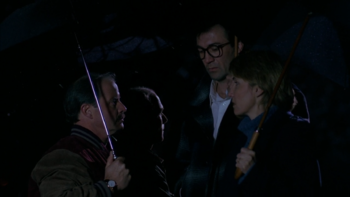 "Sein ist die Hand die verletzt. Sein ist der Ort genannt Hölle." Translation "His is the hand that wounds. His is the place called hell" in German.
Written by Glen Morgan & James Wong
Directed by Kim Manners
Mulder: Even the Church of Satan has renounced murder and torture. Their influence here wouldn't account for the frogs, or the water draining backwards, or most importantly, the murder.
Scully: Well, if not witches, then what?
Advertisement:

Mulder and Scully investigate the death of a teenager who apparently died during an occult ritual.

"Goodbye. It's been nice working with you."