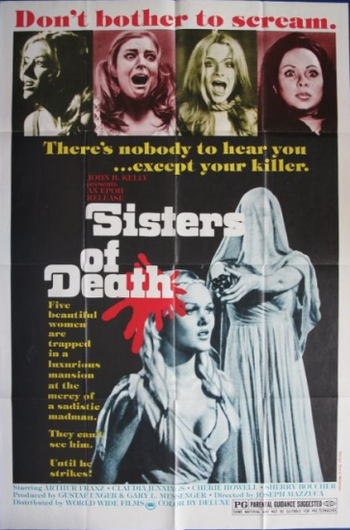 Sisters Of Death is a 1976 murder mystery, presumably in the vein of And Then There Were None, but with more artifacts of The '70s.

Judy, Sylvia, Diana, Francy and Penny are sorority sisters who witnessed the death of sorority pledge Liz during a hazing ritual gone horribly wrong. Seven year later, they are reunited via mysterious invitations for an all-expenses paid weekend getaway. The invites were sent by Edmund Clyburn - the father of Liz, the dead girl. He's convinced her death was no accident and wants the one responsible to confess and face his justice. The girls, along with Mark and Joe (the two men hired to bring the girls to Clyburn's home) must withstand Clyburn's wrath and the fact that one of them may be a murderer. A fact which someone is willing to kill the rest to keep a secret.

Currently available as a RiffTrax Video on Demand download.