Literature / And Then There Were None 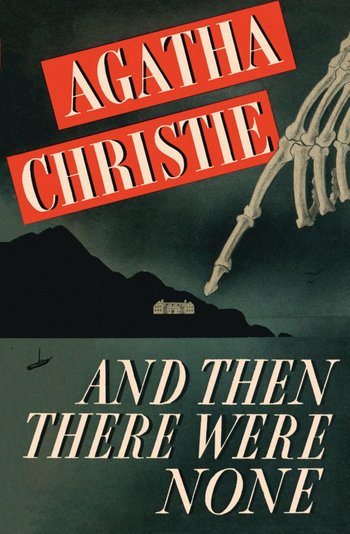 A really bad weekend getaway.
"Ladies and gentlemen! Silence, please! You are charged with the following indictments..."
Advertisement:

And Then There Were None is, without hyperbole, one of the most famous and popular murder mysteries ever written. It is also among the best-selling novels of all time in any genre.

Agatha Christie published the novel in 1939 and later adapted the story into a play (with an Adaptational Alternate Ending) in 1943. The various film versions mostly use the play's ending or a variation thereof, which makes sense once you know the book's ending. Screen adaptations include a 1945 film, a 1965 film (titled Ten Little Indians), a 1974 film, a 1987 Russian film, a 1989 film (titled Ten Little Indians), and a 2015 BBC miniseries. The 1987 and 2015 versions are the only major adaptations that retain the original ending.

The novel has been published under several different titles, as a direct result of Values Dissonance. It was originally published in the UK as Ten Little Niggers, which was not shocking in 1930s Britain. In the United States, more sensitive publishers changed the title to And Then There Were None, while many earlier foreign translations kept the original title, such as Dix petits nègres in French or Zehn kleine Negerlein in German. The book was also published in English as Ten Little Indians on both sides of the Atlantic, until people eventually came to see that title as racist as well. And Then There Were None has, more or less, become the official standardized title.

But whatever its title, every serious mystery fan knows the novel's plot by heart: ten people, strangers to one another, receive invitations to an island hideaway. A mysterious recording played for the group accuses each person of having caused another person's death. Some time after the record is played, members of the group start dying one by one, each in ways similar to those in the rhyme ("Ten Little Niggers" in the original British edition, "Ten Little Indians" in many later editions, "Ten Little Soldiers" in current editions). Those still alive soon come to the only possible conclusion: one of them is killing the others. Paranoia and suspicion run high, as each person tries to outwit the killer; who can be trusted when everyone around them is dying? And how long will it be before the next one dies?

The group of ten consists of:

Which of these ten hated the others enough to kill them?

This story serves as the Trope Namer for the tropes Ten Little Murder Victims and Acquitted Too Late. It is also the partial inspiration for the board game and film Clue. Some also see it as a very, very early influence on the Slasher Movie horror genre.

Not to be confused with the episode of Ben 10: Omniverse.

Given the age of the book, several plot points that could be considered spoilers are unmarked.

And Then There Were These Tropes: