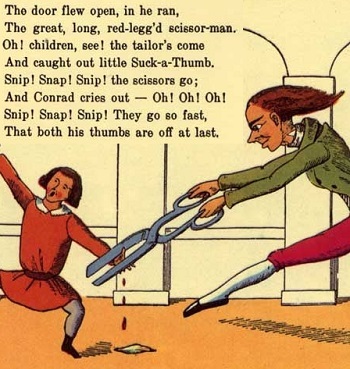 Yes, this was meant for children.
Unikitty: And I hear kids singing a nursery rhyme!
Dr. Fox: Aw! That's pretty cute!
Unikitty: No, no, no. In this context, it's super creepy.
— Unikitty!
Advertisement:

A Nursery Rhyme used to convey an underlying sadness and/or creepiness, sometimes made into a theme tune that sounds like a music box that's slightly off key. It's mainly used to indicate someone with a Squicky past, a child molester or other psychosis. Ironically, due to this trope, it's very uncommon for anyone to use nursery music to indicate anything positive any more, making it a common theme of Grimmification.

Occasionally the writers want to be more poetic with it, and a character will sing the lyrics to some bedtime song. This is sometimes handwaved as being learned from a nanny or grandmother, since they tend to be rhymes no one has used in the last century.

"Ring-a-Ring-of-Roses" (or "Ring Around the Rosey" as it's known in some parts of the world) is especially prone to this, due to the popular belief that a cute little children's song was written about the Black Death. While some disagree with this interpretation,

the lyrics of the earliest documented and best known form do lend themselves undeniably to rather dark interpretations; enough that the Victorians started Bowdlerizing it with more lighthearted variants.

Oldtime songs like "Singin' in the Rain" (seen in A Clockwork Orange) and the works of Frank Sinatra are quickly becoming part of this trope. If you enter an ancient dilapidated mansion and a song whose original listeners are either senile or dead from old age plays over and over and over, you're in trouble. Also the famous "Hush Little Baby" or "Mockingbird" lullaby seems to be the top icon of this trope, it's simple enough for parents (or some creepy unseen killer) to ad-lib further verses as required.

Overlaps with the Ominous Music Box Tune. Often goes with the Creepy Child and Ambiguous Innocence. See also Soundtrack Dissonance. The opposite, where the music box is used positively, is Nostalgic Musicbox. Compare and contrast Fractured Fairy Tale. Compare Creepy Circus Music and Sinister Whistling. Compare and contrast Creepy Children Singing, where creepy songs and nursery rhymes are played in the background to add tension and fear to a scene. Zig-Zagged by many a Playground Song, which genuinely come from children's oral tradition but often just are that dark. When used in advertising, see Moody Trailer Cover Song.

Azula explains that the song is about a past Fire Lord who crushed a rebellion in the Outer Islands of the nation, killed the rebels when they surrendered, left the bodies lying on the beaches, and then burned down all their hometowns for good measure.

Films — Animation
Films — Live-Action
Literature
Live-Action TV
Music
Tabletop Games
Theater
Theme Parks
Video Games
Visual Novels
Webcomics
Web Original
Western Animation
Real Life
The stork is the obvious symbol for Hungary and the items in the last line are metaphors for war, as in the desire for the reconquest of Hungary from the Turks.note The whistles for recruitment, the drums for battle, the violins are for the victory celebration
Feedback

Midway through the song, Chester and the possessed bystanders add in a haunting rendition of the classic Christmas carol "Deck the Hall".

Midway through the song, Chester and the possessed bystanders add in a haunting rendition of the classic Christmas carol "Deck the Hall".