Music / The Miseducation of Lauryn Hill 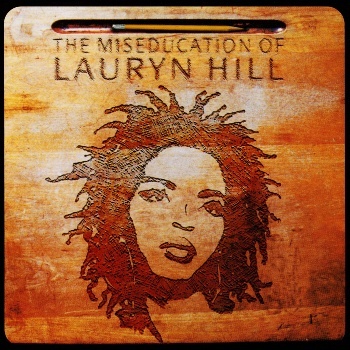 And deep in my heart, the answer it was in me
And I made up my mind to define my own destiny
"Lauryn Hill was groundbreaking because for the first time since Salt-N-Pepa the world was hearing a heterosexual woman rap and couldn't believe it. This is a masterpiece of a record. I know there's a lot of singing on there, but there's a lot of rapping, too. People don't have a problem with conscious rap; they have a problem with conscious beats. If you make some ignorant beats, you can say all the smart shit you want."
— Chris Rock, who put The Miseducation of Lauryn Hill on #23 in his personal top 25 favorite Hip-Hop albums, Rolling Stone, 2006.
Advertisement:

The Miseducation of Lauryn Hill is Lauryn Hill's first and only solo album, released in 1998 after The Fugees broke up. An impressive debut, Miseducation was notable because of both its thematic matter and its production.

The album's lyrics spoke on the in-house turmoil within the Fugees alongside Lauryn's wider perspectives on life through subjects like love, womanhood and God, all of which were influenced by her being pregnant at the time.

Furthermore, the album was unique since Lauryn actually sang more than she rapped and didn't overly rely on samples or contemporary references, giving the record a more timeless quality than most other rap albums from The '90s.

The album's success was unprecedented for not only a female artist but an artist in her genres of rap and soul. It debuted atop the Billboard 200 and won several awards, including five Grammys from ten nominations, one of which was the Album of the Year. Three singles released in promotion for the album — "Doo Wop (That Thing)", "Ex-Factor" and "Everything Is Everything" — were all worldwide hits.

Sadly, despite a promising start, Lauryn's career was quickly cut short. She suffered a Creator Breakdown, and apart from one Live Album, MTV Unplugged 2.0. (2002), she never released anything else, effectively disappearing from the public limelight.

In 2014 the record was added to the National Recording Registry for being "culturally, historically and aesthetically important."

In 2018, she starting touring in support of this album's twentieth anniversary.

That was the trope that did Jezebel in