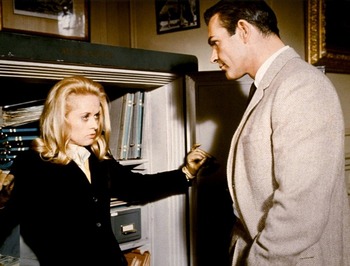 A 1964 Psychological Thriller film directed by Alfred Hitchcock, starring Tippi Hedren and Sean Connery. It was adapted from the 1961 novel of the same name by Winston Graham.

Marnie Edgar (Hedren) is a young woman with a number of quirks. She has an unnatural fear and mistrust of men, thunderstorms, and the color red. More importantly, she suffers from kleptomania. Her latest victim is her employer Sidney Strutt (Martin Gabel). She disappears with the contents of his safe. She later applies for a job to the company of publisher Mark Rutland (Connery).

Mark, a widower who happens to be an acquaintance of Strutt, easily recognizes Marnie, but is intrigued by her and decides to hire her. When the inevitable theft does happen, Mark tracks her down. He blackmails Marnie into marrying him, otherwise she'd be arrested and land in jail. His family, especially his sister-in-law Lil (Diane Baker), views this sudden marriage with befuddlement and suspicion. He waits until their honeymoon cruise to have sex with her. She is at best frigid. Her frigidity and open hostility to her blackmailer husband inspires him to perform Marital Rape. Marnie does not enjoy the experience and attempts to commit suicide.

Mark rescues her and decides to get to the bottom of her psychological problems by helping Marnie remember the traumatic childhood experience which caused said problems. By the end, a cured Marnie resolves to make her marriage work.

Marnie is considered the last film of a significant era in Hitchcock's career. It was his last use of a "Hitchcock blonde" as a main character. It was the last time he worked with Robert Burks (director of photography), Bernard Herrmann (music composer) and George Tomasini (editor). All three had been key members of Hitchcock's film crews since the 1950s. Tomasini died in 1964, Burks in 1968. Herrmann survived to 1975. But by 1966, Hitchcock felt his music was becoming outdated and some of his music themes too reminiscent of each other.note The fact that Herrmann went on to compose memorable scores for Brian De Palma's Hitchcock homages Sisters and Obsession, then wrote the iconic score for Taxi Driver just before he died calls this idea into question) He had Herrmann fired. With all these elements missing, Hitchcock's later films had a rather different feel to them.