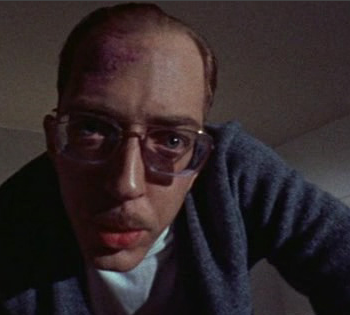 Relax.
"There was no body because there was no murder. Repeat."
— Dr. Emil Breton
Advertisement:

A cult Psychological Thriller/Horror film from 1973, directed by Brian De Palma. It was the first of his films in the thriller-horror vein, and featured Margot Kidder in an early starring role as well as De Palma regular character actor William Finley, who would go on the following year to star as the Phantom in his Cult Classic horror rock musical Phantom of the Paradise.

Young model Danielle Breton (Kidder) goes on a date with Phillip Woode (Lisle Wilson), but they have an awkward encounter with Dr. Emil Breton (Finley), who Danielle says is her ex-husband. Phillip sleeps over at her apartment, then the next morning awakes to the sound of Danielle and her twin sister Dominique arguing in French. Then, newspaper reporter Grace Collier (Jennifer Salt), who lives in an adjacent building to Danielle, is certain she's seen a murder in Danielle's apartment, and calls the police. As the story unfolds, it becomes frighteningly clear that the relationship between Danielle, Dominique and Dr. Breton is much more complex and disturbing than it first appeared to be.

The film is, in part, an homage to the works of Alfred Hitchcock, and in particular borrows from and references Rear Window and Psycho. (It doesn't hurt that Bernard Herrmann, frequent Hitchcock collaborator famed for "Psycho" Strings, composed the score.) The influence of Mario Bava, Roman Polański and Ingmar Bergman are also on display.

A 2006 remake with French singer-actress Lou Doillon as the twins, Chloë Sevigny as Grace, and Stephen Rea as the doctor was a critical and financial failure. Shares a name with a 2015 comedy from Tina Fey and Amy Poehler.