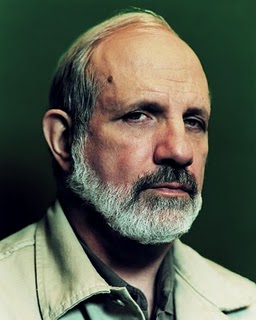 Brian Russell De Palma (born September 11, 1940) is an American film director and writer. De Palma attended Columbia University in New York, New York. He made his first film, Icarus, as a student there. After De Palma graduated in 1962, he spent time at Sarah Lawrence College on a writing fellowship. In the mid-1960s De Palma began working on his feature-length debut with The Wedding Party, released in 1969 and featured an up-and-coming actor named Robert De Niro. De Palma’s career began to take off in the 1970s with the horror film Carrie, based on a Stephen King novel. Often compared to the legendary director Alfred Hitchcock, De Palma has helmed numerous thrillers, such as Dressed to Kill (1980), Blow Out (1981) starring John Travolta and Body Double (1984). He has also created one of Al Pacino's most famous roles — as Tony Montana, a Cuban refugee who climbs the criminal ladder to become a Miami drug kingpin. In 1987, De Palma directed The Untouchables (1987) based on the television show about real life federal agent Eliot Ness' war against the Chicago bootlegging empire of Al Capone.

More than the other New Hollywood directors, De Palma embraced the technical side of filmmaking, excelling at sophisticated camera moves (like the Orbital Shot) and editing techniques (like Split Screen). It's not every director who cares enough about how his film is screened, and knows enough about how film projection works, to send out a memo to theater managers with hints on how to best resolve screening difficulties

. Also, many of his films have moments of intense self-reflectiveness about cinema: Blow Out, for example, has a sound editor (whose equipment assists his amateur investigation) as a protagonist; Body Double has an actor (and a major plot point involving body doubles); the beginning of Femme Fatale takes place at Cannes; and The Black Dahlia has Hollywood culture in the 1940s as an important plot point.

He's a BIG fan of Alfred Hitchcock — and it shows! Many of his films have obvious allusions to Hitchcock's work, and a few are even considered loose remakes of Hitchcock films. This makes him controversial among cinephiles. He's either considered to be the person who carried on the Hitchcock legacy, or an untalented pretender prone to ripping him off.

He also had a small but important impact on A New Hope; he held joint auditions with his buddy George Lucas for it and Carrie, because of the similar actor types needed for Carrie White/Princess Leia and Tommy Ross/Luke Skywalker. Then, when Lucas showed him the draft for his film's opening crawl, De Palma found it too long and too "gibberish". De Palma rewrote and edited down the crawl to the now-famous text audiences know and love that established Star Wars.