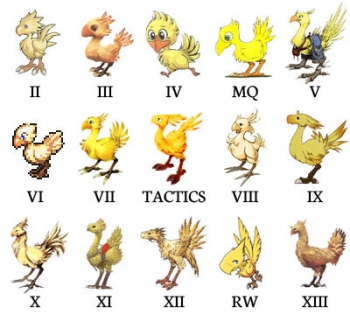 For many series, especially Video Game ones, the various incarnations are only vaguely related to each other. The works may take place on different worlds, feature entirely different characters and have very different stories. In fact, it's only the name of the work that connects it with the previous ones at all...

Only usually it isn't. Most Non Linear Sequels or Thematic Series will have a character, theme, monster, or item that is emblematic of the series and remains constant. Note that this is often not the same character, theme, etc. Sometimes only the name will remain the same. Sometimes there will be a character "inspired by" the original much like a Spiritual Successor. In all cases the recurring element is not tied to a particular world, but simply shows up in each installment of the series. Think of it as an internal trope, specific to one body of work.

These elements aren't explicit Expies, but they serve the same purpose in aesthetics, narrative, or function, or gameplay in the case of video games. Some are officially acknowledged, some are so evident they are given Fanon names, and others are just there.

See Recurring Riff for music examples, and Mascot Mook for the enemy monster version of this. Also see Mythology Gag, which is where a single work has a reference to another, but there is no example that covers an entire series. Also see Suspiciously Similar Substitute for when this was a one time thing rather than a serial one within a franchise or an artist's work. Compare Creator Thumbprint, which mainly focuses on a signature item found across multiple works by the same creator.