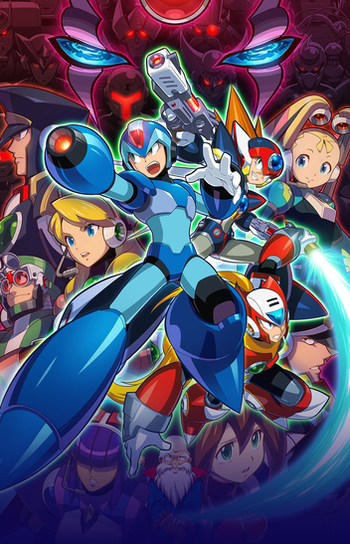 If I go Maverick, then will you still call me Mega Man?
WARNING:

"X" is the first of a new generation of robots which contain an innovative new feature - the ability to think, feel, and make their own decisions. However, this ability could be very dangerous. If "X" were to break the first rule of robotics, "a robot must never harm a human being", the results would be disastrous and I fear that no force on Earth could stop him.

Approximately 30 years will be required before we can safely confirm his reliability. Unfortunately, I will not live to see that day, nor do I have anyone to carry on my work. Therefore, I have decided to seal him in this capsule, which will test his internal systems until his reliability has been confirmed. Please do not disturb the capsule until that time.

"X" possesses great risks as well as great possibilities. I can only hope for the best.

As his Magnum Opus, Dr. Thomas Light created Mega Man X, a robot with the ability to completely think, feel, and make his own decisions. Dr. Light sealed X inside a capsule designed to run ethics testing over the course of 30 years to test X's reliability, believing that X would turn to evil if not tested repeatedly within the capsule. A century later, archeologist and scientist Dr. Cain unearths X's capsule and soon becomes astounded by Dr. Light's engineering miracle. He decides to mass-produce a line of robots based on X — "Reploids" — but glosses over the fact that he doesn't fully comprehend Dr. Light's work. What Could Possibly Go Wrong?

Soon after their activation and deployment into the world, some of Cain's mass-produced Reploids develop bugs and glitches that cause them to go mad and become disobedient. These malfunctioning Reploids become known as Mavericks.note "Irregulars" in the Japanese version. To combat the increasing Maverick menace, Cain helps to create the "Maverick Hunters", a group of Reploids authorized to use force in apprehending or outright stopping their violent brethren. One of Cain's creations, an advanced Reploid named Sigma, becomes the leader of this group.

Cain's work backfires again when most of the Maverick Hunter group, including Sigma, turn into Mavericks themselves. Why the others turned, we have no idea, but Sigma turned soon after getting into a fight with "Zero," a mysterious and insane robot of similar capability to X but of unknown manufacture. Sigma's defection heralds the beginning of a massive war between Mavericks and humanity — and since he feels responsible for the Maverick outbreak, X decides to team up with Zero (repaired after Sigma knocked out him out with a decisive blow to the forehead, which makes him useful to the Maverick Hunters) and put a stop to the war.

In terms of gameplay, the series has the same basic formula as the Classic series: you choose levels in no particular order and gain weapons from defeated bosses; you use the weapons in an Elemental Rock–Paper–Scissors system against the other bosses; lather, rinse, repeat. The X series, however, have a much more aggressive playstyle than the Classic series due to the existence of Video Game Dashing and Wall Jumping. The games' maps have a much bigger and more open design than the Classic series' maps to accommodate the new playstyle. Taking cues from the Role-Playing Game genre, the series also introduced hidden collectible items that grant a life meter boost, armor parts for X that upgrade his abilities, and interchangeable parts to enhance attributes or grant passive effects.

The series saw several sequels on the Super Nintendo, Sega Saturn, PlayStation, and PlayStation 2. It also spawned Mega Man Zero, an even darker Sequel Series for the Game Boy Advance, in 2001. An anime OVA, The Day of Sigma, came with the PSP remake of the first game (Maverick Hunter X). Several manga adaptations of the first five games have added some additional characters (such as the Merloid Marti) and additional characterization for the various Mavericks and their motivations for defecting. Three Cardass card series, Rockman X: Megamissions, also got published; while not part of the official X canon, their place in the timeline falls roughly somewhere between X1 and X2 (and X2 and X3 for the third Megamissions).

Until 2016, Zero was the only character from the X series who appeared as a playable character in the fighting installments of Capcom's Vs. series, serving as the sole X series representative in both Tatsunoko vs. Capcom: Ultimate All-Stars and Marvel vs. Capcom 3. (His Zero incarnation also appeared in SNK vs. Capcom: SVC Chaos as a Mid-Boss.) This would change with the announcement of Marvel vs. Capcom: Infinite, where X was unveiled as a playable character for the first time in Vs. series history. Sigma himself, depicted in his Mega Man X form, is also present, serving as one-half of the Big Bad Duumvirate alongside Ultron. Additionally, both X and Zero appear in the crossover Project × Zone and its sequel, and Sigma's Mega Man X4 incarnation appears as a hidden character in Super Ultra Dead Rising 3 Arcade Remix Hyper Edition EX Plus Alpha.

Do not confuse this series with Mega Man 10, the tenth game in the Classic series, which came out well after Mega Man X.

Two character sheets exist for this franchise: one for the main series, and one for Command Mission.