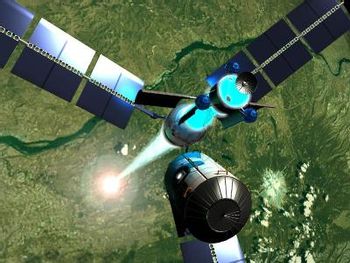 Exhibit A: The GDI Ion Cannon Satellite. Exhibit B: Something that has stopped being architecture and started being physics.
"In war, one should seek to take and hold the high ground. From there, the enemy's movements are clearly visible, and he will struggle just to reach you, let alone fight you. High orbit is the highest ground there is."
— The Codex Astartes, Warhammer 40,000
Advertisement:

When it absolutely, positively, has to be destroyed on time, nothing beats your own remote-controlled, satellite-mounted laser cannon.

A variation of the Wave-Motion Gun, Kill Sats have the added advantage that you don't need to be anywhere near either the weapon or the target. Instead, you can fire it from the safety of your headquarters: your satellite will move into position and unleash a shiny descending Pillar of Light (or, less often, a good ol' kinetic projectile

) on your unsuspecting target. Power/accuracy on Kill Sats vary, ranging from "lone vehicle" to "entire building" to (rarely) "town or small city." Planet busters are another category entirely, as firing them remotely from anywhere on the surface is inadvisable.

Since it's considered poor form to snipe your opponent from such a risk-free distance, Kill Sats are generally the realm of villains. So-called good guys who resort to these will, at best, fail miserably. If Everything Is Online in their world (and you know it is), there is always the risk of control falling into the wrong hands.

In video games, Kill Sats are frequently used by the good guys (ie the player) but usually requiring some sort of targeting system on the ground in the vicinity of the target (distance varies from a few meters to a few miles). If the good guys do have one, its precision and accuracy are emphasized, often by providing the bad guys with a less precise weapon of equivalent power (such as a nuclear missile).

Of course, in the hands of either side, it would end the story in a hurry if these could be used repeatedly — none of the opposing side could poke their nose into the open without risking vaporization. Therefore:

Alternatively, it's not active at all yet, in which case the story centers around making sure it never gets off its first shot. In these cases it generally leans toward the powerful end of the scale.

Kill Sats sometimes display the orbital properties of their more benign counterparts, the Spy Satellites, able to move themselves over any target in record time and then park themselves there to get off as many shots as they please. More often, thankfully, the writers actually pay attention to how satellites work and incorporate that into the plot ("we've got two hours to destroy the control center before the satellite is in position over our headquarters!")

). Spy villains love these things. The Ancient Conspiracy may already have a full network of Death Ray Sats secretly in orbit, but they're careful about using it regularly, lest someone catch on.

The Standard Sci-Fi Fleet can and will take this Up to Eleven, with the heavier ships turning their guns on a helpless planet below.

An early test fire of these may create the Doomed Hometown.

The trope name is a parody of "TelSat", the TV satellite system.

A popular way to rain Death from Above, and a subtrope of Orbital Bombardment. Compare Wave-Motion Gun, BFG, Big, Bulky Bomb, Doomsday Device, and There Is No Kill Like Overkill. Very often considered a Superweapon by the forces on the ground with no way of knowing when and where it will strike.

This item is available in the Trope Co. Catalog.

The Global Defense Agency's 'Hammer' certainly treats everything in the vicinity like a nail.

The Global Defense Agency's 'Hammer' certainly treats everything in the vicinity like a nail.