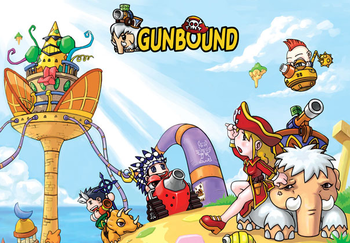 Gunbound is a massive online game based on Worms, and thus the basic game play is rather similar: Up to 8 players are divided into two groups, and the aim for each group is to wipe out the opposing team, either by killing them or dropping them into the Bottomless Pit that is always present in every game.
Advertisement:

In Gunbound, each player is represented by an avatar (which is humanoid) riding atop their steed, which ranges from dinosaurs, giant insects, vehicles and dragons. Each steed, or mobile, has different weapons and overall stats. The players can also customize their avatars with costumes which can be bought via in-game money or real cash, which not only provides cosmetic effects, but also boosts their mobiles' stats.

Before the start of every game, each player can change their mobiles and also add power-ups to their inventory. These power-ups range from increasing the number of bullets their mobile shoots, to other nifty effects such as teleportation. During the game, each player waits for their turn, then during their turn, they can move their mobile and shoot, choosing what bullet they shoot, at what angle they're firing their shot and at how much power, which determines how far their shot flies. However, they also need to take note of the field: They have to worry about the terrains (which can inadvertently block their shots), weather effects (which can increase the power of any shot fired, mess with the direction, etc), the game's Kill Sat, Thor which may do Combination Attack with the shots etc. Also, like Worms, the terrains will eventually run thin after getting blasted so many times.

The game plays in different modes: