Hurl It into the Sun 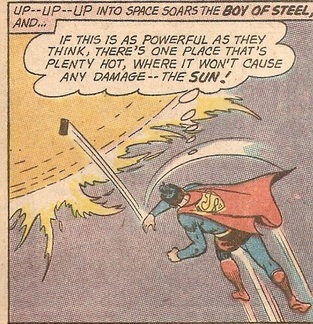 When you absolutely, positively got to dispose of something for good, accept no substitutes.
"SCP-1543-01 is a catapult with an absurdly far length of range, designed in 16██ to meet a common need of that time: launching dangerous and potentially reality-altering objects into the sun. Despite the fact that this was often an unnecessary waste of resources and time, it was often decided as the best course of action."
— SCP Foundation, "SCP-1543-J"

Have something that you need to get rid of permanently? And it can't be destroyed by ordinary means? Throw it into the Sun (or any convenient nearby star; a black hole works, too). If you have Super Strength, just give it a good toss or punch. Otherwise, you'll probably have to reprogram a space shuttle's coordinates, or possibly even set it to manual and make a Heroic Sacrifice yourself.

Realistically, the Shuttle — and any manned spacecraft built to date — has nowhere near the thrust needed. You'd have to cancel out about 90% of the orbital velocity of the Earth, which takes roughly twice as much Δv as would be required to throw whatever it is out of the solar system (while we're on the subject, Hurl It into the Interstellar Void would also be a pretty good way to dispose of something). In fact, if you had the necessary rocket engine, it would probably be easier, simpler, and cheaper to use it as a blowtorch.note ... if you've got a rocket engine capable of heating to 15 million kelvins, applying 250 billion bar of pressure, and maintaining that output for billions of years, in which case congratulations are in order (Between those two extremes, you could drop it to Earth from orbit without a heat shield.)

But those who advocate throwing things into the sun rarely know that, because they think Gravity Sucks. Furthermore, even if the object is tough enough to withstand the sun's power, it's likely that few enemies are tough enough to go after it. Also, Rule of Cool tends to apply.

A surefire way to ensure someone is Deader Than Dead.

Compare Kill It with Fire.

Into the fiery orb with ye!

I did it. I saved the world.

Mario is so pissed off with the game that simulates his life that he goes Super Saiyan and hurls it into the Sun.

Alternative Title(s): Throw It Into The Sun

I did it. I saved the world.

Mario is so pissed off with the game that simulates his life that he goes Super Saiyan and hurls it into the Sun.