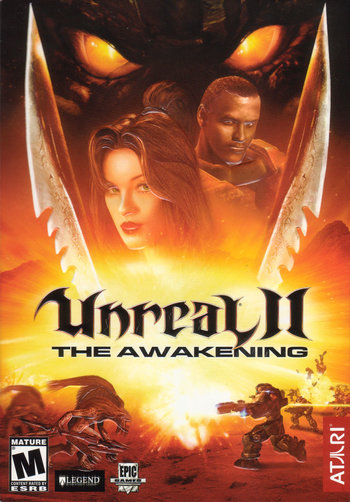 "As earth expands in this sector of space, different corporations are establishing colonies on uninhabited planets. They do everything from creating vacation resorts, to mining exotic ores, to terraforming. We in the Terran Colonial Authority patrol between the planets to keep the peace. The corporations try to get away with a lot out here, and they hire mercenary forces to help them get their way. We often find ourselves fighting the mercs to defend civilians who work for their own corporation. If we run into something we can't take on alone, we call in the marines."
— John Dalton
Advertisement:

Unreal II: The Awakening is a First-Person Shooter game developed by Legend Entertainment and released on February 3, 2003 for PC and February 10, 2004 for Xbox. It's the fourth full entry in Epic Games's Unreal series and the sequel to 1998's namesake game.

The player takes the role of John Dalton, an ex-marine "space marshal" on a ship maintained by a small crew: Aida, his stripperiffic first officer; Isaak, his gruff weapons expert/engineer; and Ne-Ban, his alien pilot. He's sent on a mission to find various ancient artifacts of extreme power, which are also being hunted by various other factions and races. As the story unfolds, Dalton uncovers even more dark secrets, one of them tied to the leader of the organization he's working for.

The game focuses on more story-driven, setpiece-laden linear levels and lots of character interaction, as well as pitting you against humans for most of the game, with the only link to the original being a few cameos and battles against the Skaarj and armored versions of them, called Mecha Skaarj, in the first two levels and the second-to-last level of the game. Its main contribution to the series' lore is the introduction of the Axon and Izanagi corporations as counterparts to Mega-Corp Liandri. Its place in the Unreal timeline is set between Return to Na Pali and Unreal Tournament.

As for the gameplay side of things, the game ditched the multiplayer mode (as it overlapped with the concurrent Unreal Tournament 2003 and Unreal Championship on PC and Xbox), and its weapon roster was renewed, with many of the Unreal mainstays being replaced by different counterparts, to say the least. Movement was also closer to modern FPS of the era rather than Unreal's usual "wackiness". As a result (and as a consequence of the last-minute trims), the game felt more like an average and somewhat derivative First-Person Shooter even for the time, and wasn't well received.

In July 2003, a multiplayer-focused Expansion Pack to the game, called Unreal II XMP (short for Expanded Multiplayer) was announced. XMP is a class-based gamemode where each team has a base with two Artifact Nodes on them. The objective, thus, is to bring these nodes to the team's own base, or capture the energy generators spread throughout the map. This game also introduced vehicles, the three of them being the one-man Raptor, the tank Juggernaut and the multi-man vehicle Harbinger. Unlike the main game, this official addon was well received, and future games of the series would include at least one gamemode based on this template.

Recurring tropes for the series include:

Tropes exclusive to U2 include:

Tropes regarding the XMP Expansion Pack include