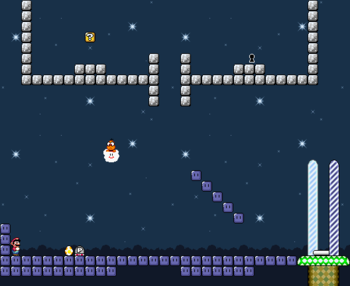 "What is this, a level for ants?"
A video game level which takes a ridiculously short time to complete when compared to others in the game. In most cases, it will take no more than a few seconds. May often apply to tutorial levels if they are supposed to teach you just a single mechanic of the game. A Boss-Only Level featuring a Zero-Effort Boss may be this.
Advertisement:

It can sometimes induce the Empty Room Psych effect, if the player can't immediately accept that there's really nothing more to this level. On the other hand, sometimes there is something more: such levels may feature secret or optional areas far more extensive than the mandatory part.

Note that this only includes levels which are intended to be that short in normal gameplay. Levels which can be bypassed by glitches, optional secrets or cheating (including foreknowledge of door codes, passwords etc.) do not count.

Compare Rush Boss. Contrast Marathon Level. See also Press Start to Game Over for a different kind of absurdly short gameplay. A Boss-Only Level counts as this if the boss is especially short. For the music equivalent, see Miniscule Rocking.