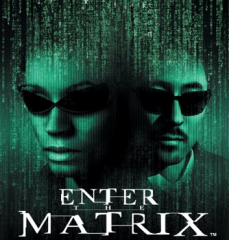 The 2003 tie-in video game to the saga of The Matrix, Enter the Matrix follows Captain Niobe and the crew of the Logos and their side of the war. The narrative picks up just after the events of The Animatrix short "Final Flight of the Osiris", and weaves in and out of the plot of The Matrix Reloaded.

Gameplay consists of a lot of running, fighting, slo-mo, shooting, driving and occasional problem-solving, as you use your free-minded character to take on endless mooks and escape the occasional agent or two (or loads, in the case of Agent Smith). The game is also notable for having over 40 minutes of live-action cutscenes shot alongside The Matrix Reloaded and utilizing its cast, sets and crew. That footage was later released separately on the Limited Special Collector's Ultimate Edition and would be interesting to see even for those who will find the graphics of the game itself long outdated to even bother with.

At the time of its release, it had the biggest budget ever for a video game, perhaps due to its use of Serkis Folk and live-action cutscenes. Unfortunately, it was rushed out in order to be released at the same time as The Matrix Reloaded, and as a result, has more than its share of gameplay issues, to the mixed reviews of most. Nevertheless, Enter the Matrix does a good job of filling in some of the gaps left by the films, and the game's creators insist that the Matrix saga is not complete without it. It was followed by 2005's The Matrix: Path of Neo.