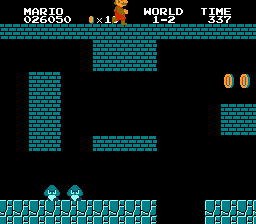 Going low is for peasants and Goombas.
Advertisement:

There are many types of video game levels. Some are easy. Some are moderately hard. Some are hated by many people for being too damn hard. But some have a really easy way to beat them. A level that would normally take an hour to beat or high effort. But if you Google the level, stuff will come up, namely, people claiming that they beat it in 10 minutes tops. Tricks may include exploiting glitches or flaws. If a target time or score is far too good to get the conventional way, the game could be hinting that this method exists.

Some players feel that this method of clearing a level isn't considered "truly" beating it, or call it outright cheating. Sometimes this is acknowledged in-game due to the trick skipping items that are part of 100% Completion, but in other games skipping the level makes no difference at all.

Common in Real-Time Strategy games, Stealth-Based Games, Adventure Games, Puzzle Games, and any genre that has objectives other than "totally destroy your enemies".

Compare Sequence Breaking, where you skip part of a game's story, Outside-the-Box Tactic, where you can exploit overlooked strategies for your own advantage, Cutting the Knot, where you're supposed to win with precision but can just headlong charge to the same results, and Dungeon Bypass, where you can cut a lot of distance. Sometimes overlaps with Offscreen Start Bonus. Speedruns rely on these, more often than not. If this trick can be applied to any level and wasn't intended, it's a Game-Breaker.

Do not confuse with Peninsula of Power Leveling.