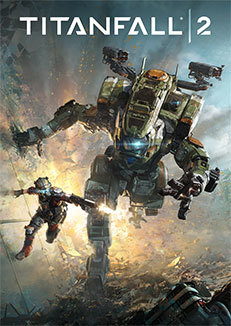 From one fight onto the next, two outlaws ride with weapons flexed. One is quick, the other's tall - together, they'll kill them all.

Titanfall 2 is a Sequel to the 2014 Competitive Multiplayer First-Person Shooter Mecha Game Titanfall, developed by Respawn Entertainment and published by Electronic Arts. Unlike the original game, Titanfall 2 was released for the PlayStation 4, Xbox One, and PC, with Respawn promising new Titans, more Pilot/Titan customization, a deeper player-progression system for multiplayer and a dedicated single-player campaign. The game was released on October 28, 2016.

The story of the campaign features Jack Cooper, a Frontier Militia rifleman who desires to be part of the elite Titan Pilots. By accident, Jack is forced to be the Pilot of a Vanguard-class Titan "BT-7274" when his original Pilot is killed-in-action. Left behind enemy lines on the planet Typhon, Jack and BT must work together to complete the latter's mission.