Video Game / Pump It Up 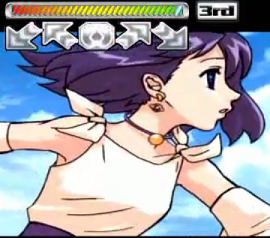 .
Everybody dance to the PUMP sound. You can move your feet in the PUMP stage.
Advertisement:

Pump It Up is a rhythm game series developed by Andamiro. The gameplay focuses on stepping on panels on the floor that correspond to the four basic diagonal directions and a center panel, all in time to music. If this sounds a lot like DanceDanceRevolution, it is a lot like DDR: in fact, the game's first installment was also released in 1999. Some have speculated that the two games may have been developed at around the same time.

However, while they may have similar mechanics, the slight differences between them make them both unique in their own right. First, there's the aforementioned pad layout of 4 diagonal arrows and a center panel. Then, there's the soundtrack. Unlike DDR's greater focus on J-pop and electronica, Pump primarily has Korean hip-hop and pop as its dominant genres. Just like DDR, there's also original music by a few in-house artists, often by Yahpp and his former in-house group BanYa, who often perform classical and rock music. Yes, you heard that right. Additionally, the differing pad layout can create a much wider variety of routines, and on higher difficulties, they can get really hard really fast. It's obvious why the highest 5-panel and 10-panel difficulties used to be named "Crazy" and "Nightmare" respectivelynote and this was the norm from Exceed to NXA, mind you - all the later games from Fiesta onwards use chart types and difficulty levels instead of difficulty names in reference to their songs' charts.

There are two separate series of Pump It Up. The primary series comes from Andamiro directly, with the latest version of the game being Pump It Up XX. Games are generally released globally, though some songs are added exclusively for or removed for specific regions. This series is popular in its home country of South Korea, as well as Latin America too. The secondary series was made due to competitor DDR being more popular in the United States and Japan at the time. It uses a different engine (StepMania to be precise), and thus can be considered a series of GaidenGames.

Despite the cabinets from FX to TX having HD displays, proper 16:9 graphics support didn't exist until Prime. XX became the first game to only be officially supported on cabinets with built-in widescreen displays, including the new LX cabinet. With the release of XX, nearly every BGA from earlier games have been re-mastered in HD and modified to fit the widescreen aspect ratio.

Has nothing to do with the Elvis Costello song, even though it could make a nice Title Drop. Likewise with the Joe Budden song

Hey! Why don't you just get up and trope man?

Hey! Why don't you just get up and dance man?!?