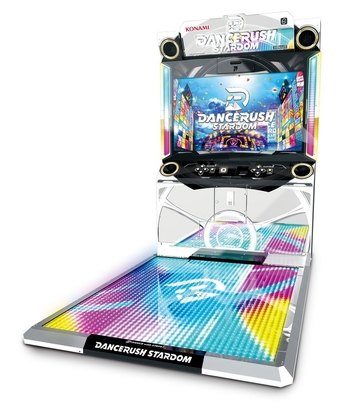 Dance Rush is a new BEMANI Rhythm Game developed by Konami. It's another dance game, except that rather than a segmented pad with buttons corresponding to cardinal directions, the game takes cues from touchscreen music games (and in particular, Chunithm) by having a large "pad" divided into columns, and an angled note display akin to Sound Voltex and the aforementioned Chunithm. The "pad" acts similarly to a touchscreen using infrared sensors, with tap, hold, and slide notes corresponding to the columns, as well as jumps and "down" notes. The notes are divided to correspond to which foot they're meant to be hit with. There is an emphasis on shuffle/running man-type moves, to the extent that this is actually one of the tutorials.
Advertisement:

The game also supports a co-op mode, with one player standing in front of the other, as well as a team battle with multiple linked machines.

The cabinet also has a built-in camera for recording and saving gameplay footage to e-AMUSEMENT for upload to YouTube and the like; it can also add sticker-like effects over your steps. The recording feature, as well as the nature of the gameplay, caters towards freestyle performers. Its soundtrack mainly features electronic music and J-pop.

The game was released on March 24, 2018 as Dancerush Stardom; Konami has not announced any official Western release ... but it does have English, Korean, and Chinese localizations built-in as user and operator-selectable options, there are some U.S.-oriented licenses on the soundtrack, and Round1 deployed the game to its U.S. locations.