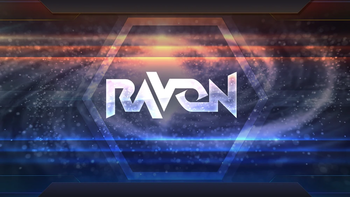 RAVON is a Rhythm Game for iOS and Android, developed by the team Synthnova (notable for having former members of the Dynamix dev team) and initially released on December 22, 2019. The iOS version comes with a starter pack of songs and missions while the Android version comes in a lite edition with fewer songs and a full edition for the same price as the iOS version. Both versions have additional songs available through paid Downloadable Content.
Advertisement:

The gameplay takes place on a 5×3 grid, with notes coming in from any of the four cardinal directions. You hit notes by touching them when they overlap with the targets on the correct squares. Occasionally, you may have to press two or more simultaneous notes, marked in blue, and hold down on long notes.

Compare jubeat, which also uses a grid for displaying notes and for gameplay input, and Dynamix, which also uses the concept of notes coming from different directions (and which has a collaboration pack in this game).