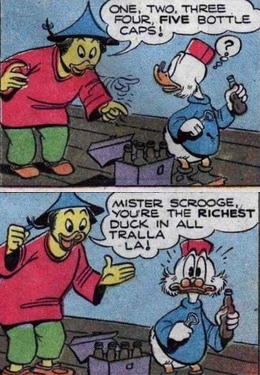 Fern: So what do you accept as payment, exactly? Please don't say something gross, like bile.
Crooked Spine: For a limited time only, all of our products are as low as a meager 5600cc! Any type or combination of types accepted!
Fern: Oh. Blood. Super.
— Awful Hospital
Advertisement:

Thanks to modern minting technology, most places have familiar currencies such as printed bills, coins, or even digitally stored currency such as credit cards. However, what happens when something goes wrong or that technology never developed?

Weird currency is when currency takes a form other than digital or minted currency. This item has a recognized social value and is exchanged for goods or services, much like regular currency is, it just comes in an unusual form.

This is not a barter system. In a barter system people trade for items directly: a goat for a cow, for example. In a monetary system, money is used as the intermediary: you sell your goat for 5 gold nuggets, and then use 4 of those nuggets to buy a cow. As a corollary, the above example is one of several reasons why monetary systems exist: trading a goat for a cow means that you're losing out on one "nugget" of valuenote  Presuming, of course, you don't consider goats and cows to be of equal value. But then you're likely to make a trade of 1 cow=1 goat+1 chicken, or something... ., whereas with money, you sell the goat, get the money, and use only the money you need to buy the cow. Therefore a barter system is "inexact", and a monetary system is "exact".

Can be an inversion of Worthless Yellow Rocks; that is when something that is usually valuable is considered trash by another culture/race/species, whereas this is when trash is held as holding value in the form of currency.

Supertrope to Practical Currency, Energy Economy, Clamshell Currency and Living Currency. Good Behavior Points are sometimes used as this. Not to be confused with Ridiculous Exchange Rates. See also Fictional Currency, which may or may not be/overlap with this.