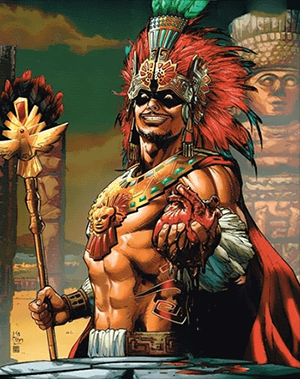 Whose culture is it anyway?
Advertisement:

Under Hollywood History, all historical ancient Mexican, Central, and South American nations are lumped into one exotic and often barbaric people: the Mayincatec, featuring aspects of the Maya (in modern Yucatan peninsula and Central America), Inca (in modern Peru) and Aztec (in Modern Central Mexico), plus many others (especially the Olmec, one of the oldest, as more continues to be discovered about them). It's a tossed salad of exciting bits from all their histories, with a topping of myth and fiction. And the dressing is blood.

Generally the Mayincatec are more likely to be the villains than the heroes, and as such they are prone to Historical Villain Upgrade. The exception, of course, is if the story involves the Conquistadors, in which case they'll instead be portrayed as tragic victims of European expansion. Some Alternate History stories have them survive to the modern day, resulting in a Modern Mayincatec Empire.

In Real Life, the Maya, the Inca, and the Aztec (which is merely an exonym; the people called themselves Mexica) were all distinct Pre-Columbian cultures. The Maya and Aztec were comparatively close together (they both lived in what is now Mexico) and did engage in cultural exchange, but this is no reason to conflate them. Meanwhile, the Inca were thousands of miles away from them, their capital being in today's Peru, so conflating them would cross into Critical Research Failure territory. Their actual history is interesting and diverges from the trope quite a bit. There seems to have been some long-distance contact between the cultures (at a minimum, maize had been introduced to the Andes from Mesoamerica), but it was tenuous and the Mesoamerican and Andean civilizations were vaguely aware of each other at best. However, keep in mind that the trope is frequently also valid in modern Latin America.

See Also: Hollywood History and Very Loosely Based on a True Story. Compare Spexico, Latin Land, The Capital of Brazil Is Buenos Aires and Banana Republic, for when this happens to modern Latin American countries. Also compare Injun Country and Tipis and Totem Poles for composite versions of Native American cultures from North America. The European equivalent is Ancient Grome, when Roman and Greek cultures are mashed up together in Ancient Rome and Ancient Greece settings. See Egypt Is Still Ancient, which is when you have Egypt depicted as if it were still a land of Pharoahs and gods.