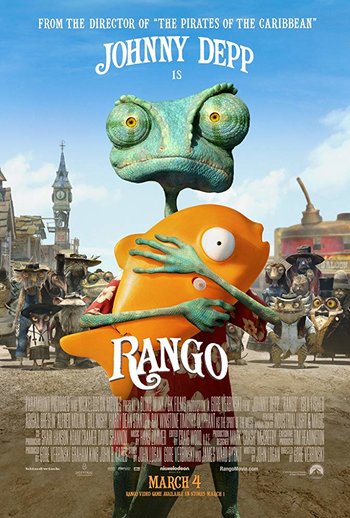 So you want something to believe in?
"No man can walk out on his own story."
—Spirit of the West
Advertisement:

Rango is a 2011 film directed by Gore Verbinski, starring Johnny Depp, Abigail Breslin, Isla Fisher, Alfred Molina, Bill Nighy, Ray Winstone and others. An ode to Spaghetti Westerns, it was Industrial Light & Magic's first feature-length animated film, as well as their only one created as an independent studio. It won the Oscar for Best Animated Feature that year.

An unnamed pet chameleon with an identity crisis falls out of the back of a car and wanders the desert, eventually reaching the town of Dirt. After accidentally killing a hawk that had been terrorising the townsfolk, he attempts to further impress the locals by concocting a badass backstory, adopting the name Rango along the way; this impresses everyone and gets him hired as sheriff by the mayor. But Dirt has its own problems; namely, the town is going through a drought and its water supply is disappearing, and it's up to Rango to find the cause.

The film plays out as a loving tribute to Westerns of the past, taking its story beats from the classic structure of classic films while maintaining its own course. References to great films of the past abound throughout the film, serving as Easter Eggs for fans of the genre.

The movie is also noted for its visual contrast with other wide-release CG animated films. Whereas most other films in the genre tend to go for a clean, idealized look for their world, Rango intentionally avoids this. Most of the characters are based on ugly-looking animals and the whole world seems to have a layer of dirt and grime on it. In addition, Verbinski filmed his actors peforming in live-action, then basing the animation on the shots. The result is a setting that looks more "real" in some ways and more cartoonish in others. Either way, it certainly stands out visually.

Example of:
Putting the Pee in Pool