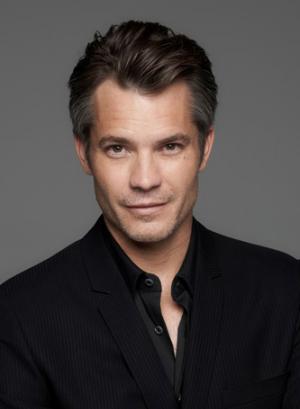 "At the end of the day, the job is to tell the story that you promised to tell and do it in the most entertaining and perhaps surprising way you can think of."
Advertisement:

Timothy David Olyphant (born May 20, 1968) is an American actor with an awesome surname. He actually got his start in show business attempting to become a stand-up comediannote he worked alongside future stars such as Sarah Silverman and Marc Maron at the Boston Comedy Club, although they don't remember his time on stage, but realized it wasn't the right career path for him and turned to acting. He eventually found scene-stealing roles in films like Scream 2 and Go which helped gain him recognition. He then landed the lead role in David Milch's critically acclaimed Shakespearean Western Deadwood, playing the brooding, intense Sheriff Seth Bullock.

Olyphant later starred in Justified, based on the books of Elmore Leonard, as Deputy U.S. Marshal Raylan Givens. His roles in Deadwood and Justified have led to a reputation as the go-to guy for a rule-breaking gunslinger with a Death Glare ready, leading him to play an expy of Clint Eastwood in Rango. He's lately Playing Against Type in sitcoms such as The Grinder, where he performed As Himself and was last seen as Bumbling Dad Joel Hammond in the Netflix series Santa Clarita Diet along with Drew Barrymore.