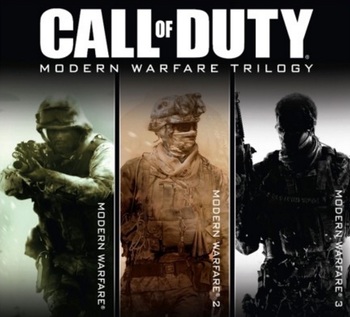 Popularizing the modern military shooter genre since 2007.
"Learning to use the tools of modern warfare is the difference between the prospering of your people and utter destruction."
— General Shepherd
Advertisement:

Modern Warfare is a sub-series in the originally World War II-themed FPS series Call of Duty, developed by Infinity Ward (with help from Sledgehammer Games and Raven Software in 3) and published by Activision, transitioning the setting to a contemporary Next Sunday A.D.. The three Modern Warfare games are considered the fourth, sixth, and eighth installments of the main series, respectively; however, MW2 was originally intended to go without the "Call of Duty" supertitle, and is often listed on various sources as just Modern Warfare 2.

The games are set in a more turbulent version of the 2010s, wherein Russia suffers a second civil war that ends with an extreme "Ultranationalist" party—founded by rogue military general Imran Zakhaev—taking over the nation. This then escalates into a second Cold War between NATO and Russia, which is exacerbated by the acts of the rogue ultranationalist terrorist Vladimir Makarov. The games see players taking control of several characters from various countries' special forces units as they try to thwart the ultranationalists and put an end to the hostilities.

The first game sees the US invading a Middle Eastern country that was taken over by an Ultranationalist-affiliated warlord, while the SAS operates to uncover a nuclear weapons plot that the Ultranationalists are orchestrating. The second game, set five years later, sees the Ultranationalists fully take over Russia, and directly go to war with the US when a covert op to unmask a wanted terrorist goes horribly wrong. The third game follows up with the resulting World War III and the desperate hunt for the man that caused all of this.

A remastered version of the first entry in the series was released in November 2016 alongside orders of Call of Duty: Infinite Warfare, developed by Raven Software. The second entry also received a singleplayer-only remaster on 31st March 2020, with a select few multiplayer maps being instead inserted into the CoD4 remaster

open/close all folders
Alpha to Bravo
Charlie to Delta
Echo to Foxtrot
Golf to Hotel
India to Juliet
Kilo to Quebec
Romeo to Zulu
RAMIREZ! Use your laser designator and index this article!
Feedback