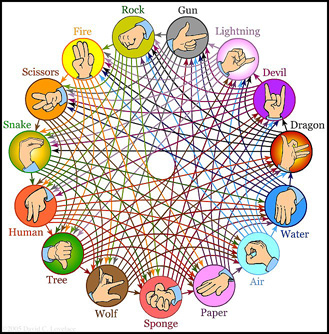 The Bird still needs a Nerf, though.
Rock is overpowered, but Paper is perfect.
— Scissors
Advertisement:

An effect of Competitive Balance, this phenomenon arises in a game with what might be called "multiple axes of conflict" — primarily, a game which contains both Player Versus Environment and Player Versus Player content, though other conflicts (such as balancing solo player versus player AND group player versus player) can fall into the similar traps. PVP Balanced describes the state where the needs of two different environments — usually PvP and PvE — conflict, resulting in a major headache for the developer as they attempt to balance the game.

In order to create greater diversity, characters have different strengths and weaknesses — a rogue might be very good at dealing damage but not so good at taking it, a wizard might be excellent at debuffing enemies but have difficulty dealing damage, a healer may be excellent at healing and buffing their allies but terrible at dealing damage, and a warrior might be good at drawing aggression from enemies and taking punishment, but mediocre at anything else. So what happens when these characters, often designed for group PvE experiences, get thrust into solo PvP combat? How does the healer fight back against the rogue? Can anyone kill the warrior, or is he just too tough to bring down before his damage overwhelms the opposition? Is the wizard utterly useless, or can he perpetually stunlock his enemy and prevent them from ever acting at all?

All of these are possible issues which arise when powers intended to be used against massed groups of enemies and AI controlled bosses instead are brought into PvP combat — what is fair against an AI may not be fair against a player character. Oftentimes PCs have utterly different stat arrays than NPCs — NPCs often have vastly more hit points than player characters do, and deal very different amounts of damage. A NPC doesn't get bored if it gets stunned repeatedly or otherwise severely impaired by debuffs, nor does it mind if it gets shredded in a few seconds by a high-damage character. An NPC often attacks in a scripted manner, meaning that a tank can draw "aggro" that forces NPCs to attack it, but which doesn't necessarily work on human-controlled characters. And NPCs don't necessarily go for the healer first, whereas humans are very likely to do so every single time. Ranged PCs may be able to run away from melee characters all day, preventing them from ever engaging, or alternatively start out so close to the melee characters that they gain no benefits from their ranged attacks, or might even endanger themselves with their own abilities when fighting an enemy up close.

As such, what works for PvE often does not translate well into PvP — stunlocks are severely unfun, healers may go down in mere moments due to the sky-high damage of characters relative to PC hit point total or have such good healing as to be unkillable, or the tank might have counterattacks that instantly kill or otherwise severely cripple anyone who attacks them. It's even worse when the PvP environment is different from the PvE environment in scale — solo PvE characters have very different needs from group PvE characters (needing to be much more well rounded), which may translate poorly into group PvP combat where everyone having a role makes for a stronger team, while the opposite — the standard PvE group of 4-5 people of three to five roles doesn't tend to translate well into one on one dueling.

The unfortunate end result of this is that if a power is weak in one environment, but strong in the other environment, correcting its balance may be impossible — making it stronger for the weak environment may result in it becoming broken in the environment it is strong in, while weakening an overpowered power in one environment may render it worthless in the other. Any buff or nerf affects both PvP and PvE, resulting in players from the environment where the power is negatively affected complaining about how it is too weak or too strong now. If powers are separated by environment, a different issue may result where a character might funnel all of their power into PvE or PvP, rendering them very bad at the other environment but potentially overpowered in their own — neither of which are desirable outcomes. And if powers don't behave identically in PvE and PvP, it often leads to a steeper learning curve while transitioning from one to the other, causing player frustration at the inconsistency of the effects of their powers. Woe betide the world where PvP is global, thus further adding to the confusion of which powers to use where, or what they do in what situation.

This problem is most prevalent in MMOs, where PvE and PvP both tend to be major concerns, but can arise in any other form of multiplayer game where both environments exist — games from Mass Effect 3 to Tabletop Games are affected by such issues. Note that these issues are not restricted to class-based games, either — in any game where player characters are not identical, and both PvE and PvP exist, this can be a potential issue. This isn't even necessarily have to be restricted to games with combat content — any game wherein there is both competition against the computer and competition against other players, where those two types of competition are not nearly identical, can be affected.

Caused by the need for Competitive Balance. See An Adventurer Is You, The Great Player Versus Player Debate, and Fake Balance. Compare Lensman Arms Race. Usually an issue for characters who are newly Promoted to Playable.