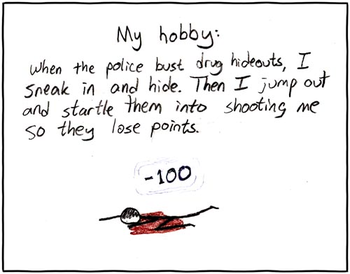 "The only one of these games I really played was Area 51"
"Hey, Mr. Blonde! You see too many movies?!"
— Bain, PAYDAY 2
Advertisement:

A curious phenomenon in modern Light Gun Games where accidentally shooting innocent people will cause damage to you, either through health and resources, or to overall score.

This is used to add difficulty and to prevent the player from spraying bullets everywhere whenever he turns a corner. Naturally, these innocents will be in places where it's easy to get startled and confused and shoot them. If handled poorly, it can often seem that the innocents are simply trying to get shot.

Accidentally shooting hostages will remove portions of your health.

Accidentally shooting hostages will remove portions of your health.