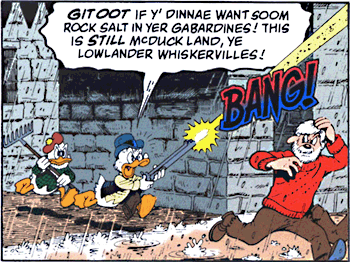 A violent or menacing character on British television, especially if a raving drunk and/or a mad homeless man, will often have a Glasgow accent, since Glaswegian is a very good accent and dialect for uttering threats.

The character often uses headbutts (also called "The Glasgow Kiss"), knees in the crotch, improvised weapons and other unsportsmanlike fighting methods. The "Angry Scotsman" occasionally makes an appearance in American media, (though the Irish sometimes get a similar treatment, since as far as the Hollywood Atlas is concerned, they all come from Scotireland anyway). By the 21st century, the Angry Scot archetype has receded, to the point where Groundskeeper Willie of The Simpsons is probably the most popular and well-known character to fit this stereotype on British TV today, despite the show itself being American.

A connected stereotype is the "ned" (according to incorrect folk etymology, short for Non Educated Delinquent) — a young Glaswegian hooligan who wears tilted-up baseball caps, lots of gold bling and tracksuits, travels in packs, drinks Buckfastnote A tonic wine, popular among binge drinkers in Scotland - one bottle contains as much caffeine as 8 cans of cola, and known as 'Buckie' . by the gallon, and is impossible to understand.

This is a counterpart to the English "chav" stereotype and the Irish Dublin Skanger.

The stereotype may have come from existing stereotypes about the Scots and also some Truth in Television about Glasgow. Any metropolis in 19th and early 20th century Britain had a lot of urban poverty and crime. But, in Glasgow, it was compounded by sectarian tensions between the Irish Catholic immigrants and the native Protestants. In the interwar years, the city became notorious for "razor gangs,"

(often sectarian) gangs that were armed with knife-like razors. Today, the main surviving case of sectarian tension is the rivalry between Rangers and Celtic, one of the longest-running and ugliest football feuds, and violence still happens to at least some degree at every game between the two.

After World War II, the old problems faded, while new ones sprang up in their place. 60s planners cleared away the original slums, but the tower blocks and other developments that were built aged badly. The former "Workshop of the Empire" was hit hard by industrial decline, perhaps the worst case of any major city in Britain. Factories and once world-famous shipyards closed. Unemployment and crime rose, a new street gang scene emerged and the trope stayed alive. Though some neighbourhoods remain deprived to this day, the city as a whole has done much to recover and its crime rates have fallen greatly. Once the 'Murder Capital of Western Europe', its murder rate is less than half it was at its height

Glasgow also has a reputation for being one of the friendliest cities in Scotland, especially in contrast to relatively aloof Edinburgers. It is also noticeably better run than most urban areas in the UK, especially, again Edinburgh, which columnist Alan Cochrane called "the worst run city in Europe." Given the trams scheme, he probably had a point...

Notably, there are at least two fighting tropes named after the city. The Glasgow Kiss is not to be confused with a Glasgow Grin, which is when somebody's cheek is sliced open from corners of the mouth, something the original razor gangs and later delinquents did to their enemies. It's worth mentioning that the royal motto of Scotland is "Nemo me impune lacessit", Latin for "No-one attacks me with impunity", loosely rendered in Scots as "Wha daur meddle wi' me?" or in Glaswegian as "Nae messin'".

Mostly overlaps with Fiery Redhead since Scottish people are known to have red hair.

See also Brave Scot, Brooklyn Rage, Southies, Dublin Skanger. The Irish, or at least Oirish, counterpart to this (assuming there is a difference) is Fighting Irish. For the English counterparts, see The Mean Brit. Ironically, No True Scotsman is often used to defy this trope. Overlap with The Scottish Trope is not unheard of, though.

Groundskeeper Willie, talking about the natural enemies of Scots (including other Scots)

Groundskeeper Willie, talking about the natural enemies of Scots (including other Scots)