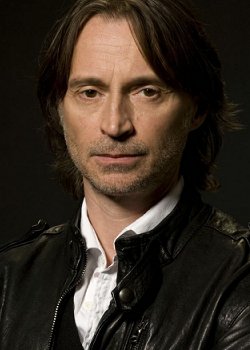 All magic comes with a price.
"Acting is probably the greatest therapy in the world. You can get a lot stuff out of you on the set so you don't have to take it home with you at night. It's the stuff between the lines, the empty space between those lines which is interesting."
Advertisement:

Dr. Robert Carlyle OBE (born 14 April 1961 in Glasgow, Scotland), although he doesn't use the Doctor title.

Robert is an actor born in Glasgow, and he frequently plays Violent Glaswegian characters as well as villains in general. Despite this, his co-stars on Once Upon a Time have noted that it's really hard to be scared of him/act as such because he's a really nice guy in real life. His best known roles include The Full Monty, Trainspotting, The World Is Not Enough, and the aforementioned Once Upon a Time. He also appears in the video for the Oasis song "Little by Little".