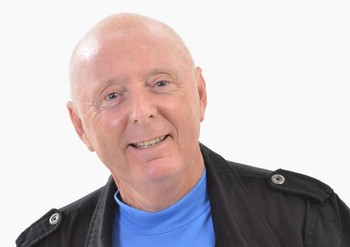 "I was never the class clown, and I've no idea where the comedy came from."
Advertisement:

Robert Norman Davis, OBE (born 14 March 1945 in Acocks Green, Birmingham, England), better known as Jasper Carrott, is a veteran British stand-up comedian who has been performing since the 1970s. He is also a folk singer and incorporates this into his act, both conventional comic songs and also Visual Pun or Literal-Minded gags such as (strums guitar) "#Unforgettable..." (trails off with confused, searching look)

He grew up in Acocks Green, Birmingham, alongside a lifelong friend Bev Bevan, who found fame himself with the pop group The Move and its successor the Electric Light Orchestra. Indeed, at one point Bob Davis might have been a guitarist with the Move, but was edged out of consideration by the more accomplished Roy Wood. This freed him up to go solo as a singer-performer on the folk circuit, luckily for the rest of us. As with Mike Harding and Billy Connolly, he discovered the patter in between songs was appreciated more than the songs themselves, and as a result the spoken bits became longer, and the songs got further apart and more offbeat.

His television series have included An Audience with Jasper Carrott (1978), Carrott's Lib (1982-83), Carrott Confidential (1987-89), Canned Carrott (1990-92), The Jasper Carrott Trial (1997), Jasper Carrott - Back to the Front (1999), and 24 Carrott Gold: The Best of Jasper Carrott (2004). Audience, Back to the Front, and 24 Carrott Gold simply had Carrott performing standup for half an hour, while Lib, Confidential, and Canned featured a mixture of standup, sketches (sometimes featuring other up-and-coming comics like Mark Arden and Stephen Frost, Chris Barrie, or Steve Punt and Hugh Dennis), and music, and Trial featured clips of Carrott's previous series and specials with a framing device of his trial for various "crimes".

His comedy is focused on observational humour and he is particularly adept at weaving a story and carrying the audience along with him. A native of Birmingham and sporting a Brummie accent, some of his earlier routines were about the trials of supporting the not very successful football team, Birmingham City FC. He was also the first and best-remembered host of Commercial Breakdown, The BBC's programme about amusing and unusual adverts from overseas (ironically, The BBC itself doesn't carry advertising, and the ad agencies only agreed to allow their commercials to be shown if the product and slogan were included). He has starred alongside Robert "Jesus Christ" Powell in The Detectives and Meera Syal and Nina Wadia of Goodness Gracious Me in the multicultural sitcom All About Me.

Although a successful comic, he made his fortune through his production company Celador (supposedly named for what many non-English speakers consider to be the most incongruously beautiful sound in English, 'cellar door') which has seen such prominent successes as Who Wants to Be a Millionaire?. He retired from stand-up in 2004 after a series of performances in Birmingham going through his best material of the past, but since then has popped up as the host of the Game Show Golden Balls.

His daughter, Lucy Davis, became an actress. Her first role was in The Detectives.