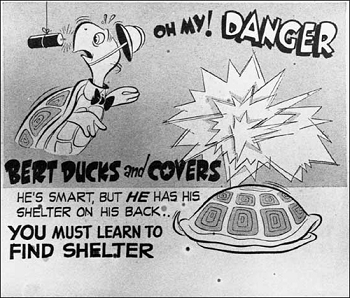 The user-friendly way to impart information and training and a prime target for parody, the instructional film is a short presentation that has generally been created by a government department or a business to impart training or information on a specific area... cheese making, avoiding nuclear attack, understanding the Dewey decimal system, care and maintenance of the IBM System/360 mainframe... the list is endless.

Because of the need to educate the young and/or presumably ignorant, the intellectual level is often pitched very low indeed, leading to many of these films having a deeply condescending tone. They are also often vehicles for propaganda or contain the unconscious attitudes and biases of their producers.

They are rarely kept updated to current fashions; literal, intellectual, or cultural. Parodies usually have films in the style of filmreels from sometime between the 1930s and 1950s.

A particular target for parody is the specific sub-type, the fast-food training video.