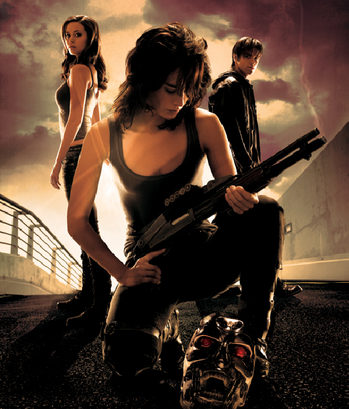 Will you join us?
"In the future, my son will lead mankind in a war against SkyNet, the computer system programmed to destroy the world. It has sent machines back through time, some to kill him, one to protect him. Today we fight to stop SkyNet from ever being created, to change our future, to change his fate. The war to save mankind begins now."
— Sarah Connor
Advertisement:

Terminator: The Sarah Connor Chronicles is a science-fiction series set in the Terminator universe that aired in 2008-2009. It's set after the first two films, and although it acknowledges some plot elements of the third movie, it goes in a different direction. Sarah and John are still on the run from the FBI, a new Terminator, and their own sorry social lives—that is until Cameron (Summer Glau) shows up to bring them from 1999 to 2007 in order to stop SkyNet from being built.

The first season deals with Sarah (Lena Headey), John, and friendly machine Cameron on the run from the killer cyborgs. They are soon joined by Derek Reese, John's uncle, who introduces himself by murdering a man who may have helped contribute to the design of his future's SkyNet. This marks the start of the show's headlong dive into murky morality. The foursome set up shop in Los Angeles, where they try to stop the future war and hide from FBI Agent Ellison.

The show then takes a quick swerve with Ellison's growing awareness of the machines and the introduction of a love interest for John. The Terminator Cromartie, who has been hunting the Connors since the first episode, is re-appropriated for another, possibly sinister use. The second season starts with a Terminator of the Week style but soon grows more philosophical and starts to develop its own Myth Arc. The series was canceled after its second season.