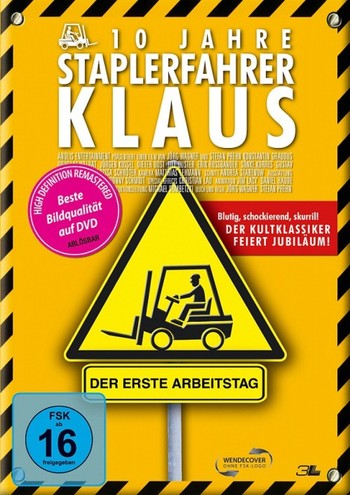 Meet Klaus. Klaus recently became a certified forklift driver. Today is Klaus' first day driving a forklift. He has been looking forward to this day for some time. He wants to be the best forklift driver ever.

However, Klaus will find himself in the middle of a horrifying sequence of bloodshed and destruction. Why?

Because Klaus is the central character in a workplace safety video.

Forklift Driver Klaus - The First Day on the Job (German title: Staplerfahrer Klaus – Der erste Arbeitstag) is a short film from 2000, presented as a workplace safety video for forklift drivers, centering on the newbie Klaus (Konstantin Graudus) and narrated by Egon Hoegen, who also narrates Der 7. Sinn, which gives tips for correct behavior in road traffic. However, Klaus parodies the workplace safety video, using over-the-top violence and Gorn to demonstrate the brutal consequences of insufficient workplace safety, which results in the horrifying deaths of nearly everybody at the site. Although the film is not officially part of the German training and education system for forklift trucks, it is frequently shown by instructors to lighten up the mood.

The film is now viewable as an official upload with English subtitles on YouTube.

The film has won many awards, including: